Although considered to be 1.9 TDI The motor is durable and reliable, it is worth knowing what to expect symptoms and breakdowns.

Engine 1.9 is considered to be the most reliable TDI with 90 hp with Bosch pump. This is because of the very simple structure. However, even in it there are some elements that can cause problems. These are mainly turbines, EGR valves, flowmeters and injectors, and vacuum hoses should also be observed.
In newer versions 1.9 TDI engine appeared solutions that expanded the list. There is a variable geometry turbine, flywheel, nozzles, soot particle filter, alternator and some additional sensors.
The most serious omission 1.9 TDI of the engine is no doubt firing a gear belt. The culprit is often the failure to comply with the timing belt replacement.
Most of these failures are inevitable over time.

The reasons for the loss of power can be different. One of the first things to pay attention to is to check the tightness of the suction system. A particularly negative impact on the performance of a car with a 1.9 TDI engine can occur due to air leaks on the hoses between the turbine and the intake manifold - for example in the area of ​​the intercooler, mounted in almost all versions of the 1.9 TDI engine. The most common reason for a large drop in engine power is one of two elements - the EGR valve or flow meter. 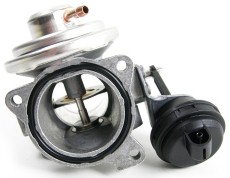 Typical symptoms of EGR valve failure are loss of power and exhaust smoke. EGR valve failure can be due to mechanical wear or deposition of large amounts of soot on the valve. With the 1.9 TDI engine, there are several versions of the EGR valve. Before deciding to replace the EGR valve, you must be sure that the reason is not a N75 valve defect.

The engine has no dynamics, increased fuel consumption, the engine is slow. The problem is with the damaged flowmeter. The ECU of the engine does not know how much air is entering the engine and is not able to properly control the engine. The flowmeter is often the first suspect in a case, such as a decrease in engine power. However, before deciding on a replacement, it is good to see if it is really the root cause of the problem.

Wear of hydraulic valves is indicated by noisy valves. The only cure is to replace it with a new one. This is best done when changing the timing belt, as you must unburden the engine when replacing the valve lift.

The car loses power, interrupts turbine operation uncontrollably. The N75 valve is responsible for regulating the pressure of the charge. When the dirty valve is N75, the turbine is no longer functioning properly. Solution: Sometimes disassembly of the valve helps to disassemble and clean the valve, or it must be replaced. 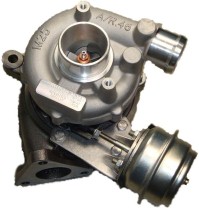 Turbine failure can be recognized by the increased consumption of engine oil in combination with exhaust smoke, and noise from the turbine is often heard, whistling is heard.
There are two types of turbine in the 1.9 TDI engine. The first is a fixed geometry turbine, it is simpler and easier to service. Another option is a variable geometry (VTG) turbine whose service is more complex.
VTG turbines can lose engine power due to the blades being stuck in the turbine geometry. The blades rotate to increase the pressure at lower RPMs and reduce the pressure at higher engine speeds. When it comes to failure of variable geometry blade control. To protect against the destruction of the turbine, the ECU of the car at overcharging pressure puts the engine into safe mode.
TDI engine with VTG turbine, should not be driven gently and at low revs, it should be regularly "expelled" on the road at higher speeds. If there is a failure of the control, jamming of the wings, the turbine should be removed and cleaned.
The VTG turbine in the 1.9 TDI engine does not work well due to damage to the vacuum control (solenoid valve or hose), which is responsible for changing the geometry of the turbine.
Tip Do not turn off the car immediately after a harsh ride, wait for the turbine to cool.

Nozzle malfunction is noted by giving stronger gas. In extreme cases, the car leaves a cloud of black smoke. With defective nozzles, combustion of the fuel in the cylinder is poor. In addition, there are problems with starting the engine, uneven engine performance, or lack of engine response. It's a sign that it's time for a service lift. After service, the nozzles should work just as well as the new ones.

In order for the elements of the injection system to be in good condition, it is recommended to always use quality fuels - savings in this area quickly prove to be expensive.

The warm engine is difficult to start

The engine is difficult to start when warm, it has to be long to rotate. The computer provides a small dose of fuel to start, need to reprogram the ECU of the engine, insert a new folder of engine operation.

Overview - The 1.9 TDI engine can say a lot of good things: it's creative, very durable, can be dynamic and increases the value of cars sold. However, one should not assume that every car is based on that, diesel is a good investment. There are many cars on the secondary market when 1.9 TDI engines are difficult to exploit and require large investments.

Previous: Catalyst - What does a catalyst do and what problems does it cause?
Next: Fiat Croma 2005 - 2011 - used, experience, breakdowns