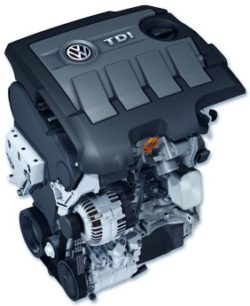 The first generation of the engine commonly known as the TDI-VP was -75, 90 and 110 hp and the fuel supply went through a Bosch rotary pump. The strongest variant is characterized by the use of a turbine of variable geometry and a floating flywheel. The engine was offered from 1991 to 2010 in a wide range of Vw models and quickly gained popularity due to low fuel consumption and good dynamics, but was criticized for poor working culture.

Direct fuel injection used in 1.9 TDI engines requires very high precision and high pressure. In principle, direct-injection diesel engines are louder than indirect-injection ones, which is why a two-stage injector has been introduced in 1.9TDI engines. This solution enabled the implementation of the so-called before injection using traditional high-pressure “Bosch” fuel pumps, mounted from the start on the 1.9 TDI engine. The first minor injection prepares the cylinder for the main fuel injection into the cylinder and improves the main combustion, which is not sharp - that is, it reduces noise. The 1.9 TDI-VP uses a turbocharger, intercooler, EGR valve and heaters in the cooling system for easy starting at low temperatures.

In 1998, a new generation 1.9 TDI - 1.9 TDI PD appeared on the market. It features the use of an injection pump-nozzle, which has replaced traditional injectors and a pump. This solution helped to increase the injection pressure and thus reduce fuel consumption and improve performance again. In this case, unfortunately, a small side effect has already appeared - slightly higher maintenance costs, this engine had a floating flywheel and a turbine of variable geometry.

The only accusation against the 1.9 TDI and 1.9 TDI PD is that they are quite noisy. Fortunately, this inconvenience is only felt in lower-class cars, and generally at low speed. When driving at a speed of about 100 km / h, there are no acoustic problems. It is important to note that in order to counteract the vibration, the manufacturer of these engines uses engine mounts with expensive oil-filled cushions. The use of inexpensive retainers made entirely of rubber and metal impairs comfort.

In the late 90s, Volkswagen The 1.9 TDI engine has offered a solution that will be widely used in passenger cars. The pump-injection system made it possible to achieve even higher injection pressure and thus reduce fuel consumption. Unfortunately, neither the booster pump with two-stage injectors nor the pump-nozzle system eliminated the main shortcomings of the TDI engine: diesel rattling and strong vibrations that pass to the car, pedals and steering wheel on smaller cars. If you hear a loud rattle under the hood of the car, it does not necessarily mean that something is wrong with the engine - it only works 1.9 TDI. 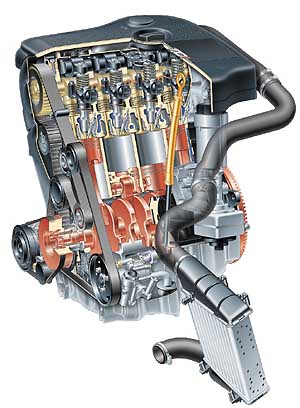 With the advent of the pump-nozzle system, the 1.9 TDI engine began to require more sophisticated handling and strict adherence to, among other things, the quality and type of engine oil.

1.9 TDI engine with pump-nozzle system, which drives the camshaft, thus creating high pressure. It takes a very large mechanical force to move the injector pump piston. With these engines, the deadline for replacing the timing belt must be strictly observed due to its additional load - the camshaft moves the injector pistons.

With the 1.9 TDI engine, the timing belt replacement intervals are substantially different and range from 60000 km to 120000 km, depending on the engine generation. When you buy a car with a 1.9 TDI engine, it is best to replace the timing belt immediately. The most reliable are considered earlier versions of the 1.9 TDI diesel, which had a rotary pump and a power of 75 to 110 horsepower. The most popular version is the 90hp diesel engine. Most often it is with fixed geometry turbines, and with luck, the car does not contain a floating flywheel. A 90 hp 1.9 TDI engine with regular service can reach 500000 km, even if the driver likes to press gas.

And finally, one more note: The 1.9 TDI, like most turbo engines, likes to consume oil. That is why it is important to check the levels regularly, especially after a long summer tour, where the diesel has worked under heavy load. You will be surprised how much she is able to consume oil on such a trip!

Volkswagen jealously guarded its successful 1.9TDI powertrain and did not give it to competing manufacturers. The only exception to this rule is the first generation Ford Galaxy. The car was a twin of the Vw Sharan and Seat Alhambra and received a wide variety of TDI engines with 90, 110, 115, 130 and 150 hp.

1.9 TDI: The construction of the early 90's is a long time, but at the time introduced a number of changes to the device. Known for its low fuel consumption. Really Good The simple and well thought out engine of the 1.9 TDI made its debut in the early 90's from the start of the injection's launch (TDI VP), but this only applies to versions with 75, 90 and 110 hp capacity. He later introduced the Power Injector (TDI PD). All 1.9 TDIs have a similar timing design, eight valve drive belts, which are subject to exchange every 90 thousand. km.

When the first 2003 TDI engine appeared in 2.0, the 1.9 TDI slowly began to pull. Unfortunately, the new diesel proved to be more unreliable. So, if there is a choice between a 1.9 TDI and a 2.0 TDI car, choose the older generation of engines, even though it offers slightly worse performance, and certainly better choose the 130hp 1.9 TDI version than the 150hp 2.5 TDI (creates big costs).

The 1.9 TDI engine offers a wide range of choices in make, model and power supply, so anyone can easily find something just for you. Provided strict adherence to all deadlines, the service for trouble-free operation of the engine, but luckily and in the event of any failure, repair should be successfully resolved by most services. Thanks to these and many other benefits, the 1.9 TDI engines have proven their worth over the years and contributed to changing the image of all diesel engines.

It is worth mentioning the benefits of long engine life, which makes it even more popular with older cars driven by this engine.

Of course, not every version of the 1.9 TDI engine is equally reliable.
Its advantages are simplicity and relatively low repair cost - it generally does not have a double flywheel and a variable geometry turbine (except for two models). Newer 1.9 TDI injector engines are more complicated, with more sensitive components.