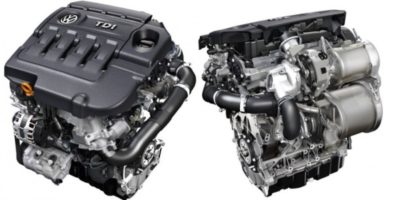 The 1.6 TDI engine was launched in March 2009, and although it was based on the larger 2.0 TDI CR, differs from it in several solutions.

The modern design uses a common-rail system, a four-valve cylinder head, piezo injectors, a plastic intake manifold, a floating flywheel, a variable geometry turbocharger and a soot particle filter. Interestingly, the engine is without shaft balance, there are hydraulic engine mounts for engine damping. Initially, the unit was available in two variants - 90 and 105 hp, which have 230 and 250 Nm of torque. A little later, a weaker version of 75 hp (195 Nm), which is used B-segment car (Fabia, Polo), which is reserved for the commercial 105 hp Caddy variant. Until 2014, there were new variants of 110 and 120 hp - the first debuted under the hood of the Golf and the latest generation of Passat models.

With the 1.6 TDI there’s no talk of a crazy racer, but for everyday use, it’s more than enough. As befits small diesel engines, a huge advantage is a moderate appetite for fuel - it achieves an average consumption of about 5-6 liters per 100 km depending on the model should not be a big problem.

German engineers have drawn conclusions from the problems with the 2.0 TDI PD engines, and this time a really solid construction is available to users. The most common causes of engine failure, loss of power, rough engine operation, are extremely sensitive nozzles to fuel quality and quickly clogged DPF in cars used on short distances. There were problems with the cylinder head, oil leaks, problems with the floating flywheel (stronger variants) and premature wear of the turbocharger - in order to prolong the life of the turbine, shorter oil change intervals of up to 15000 km are recommended.

One of the most important features is the plastic suction branch. In order to allow the rapid exchange of gases in the combustion chamber, the suction and exhaust ducts have been given special shapes, they also affect the formation of the composition of the mixture.

Important in the injection system is that when injectors are replaced, the codes of the new nozzles in the ECU of the engine should be entered. Otherwise, there will be irregularities during idle and at full load.

The flow meter, which was one of the most important elements of the degraded 1.9 TDI engine, has been replaced with the fully digital Continental. A similar solution is used in 1.4 TDCI Ford. It is desirable because of the weight and tolerance of the measurement and the ability to detect movement feedback. Other brands that use this option are bmw i Fiat. Specifically, the digital flowmeter can be measured in real time.

The 1.6 TDI engine is not equipped with a balance shaft. This has its pros and cons. On the one hand, it increases the level of vibration, on the other - it does not cause a loss of power on the drive shaft.