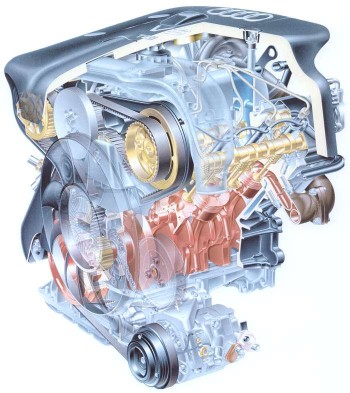 The shortcomings of the 2.5 TDI engine have proven themselves after several years of operation: the lubrication system, the injection system, the ECU of the engine and finally the gear belt. The 2.5 V6 TDI engine cannot be called perfect.

Depending on the version, the engine has a power of 150 (AFB / ANC), 155 (AIM), 163 (BFC, BCZ, BDG) and 180 hp (AKE, BDH, BAU) and provides excellent performance. In the days of its debut, it was a very modern unit, originally used in the Audi A6 and A8, then on Audi A4 and Vw Passat, and finally the Skoda i Superb. It is equipped with a variable geometry turbine and direct fuel injection.

Unfortunately, Volkswagen engineers probably did not do the engine test in real conditions, because after at least 200000 - 250000 km they would know about all the problems.

In practice, failures of 2.5 TDI engines were detected very quickly. There were problems with the factory injection parameters from the beginning, the reasons were different. One of these is a fuel pump malfunction, control electronics problems and a fuel dose adjustment magnet. The radial distributor pump is more sensitive to impurities in the fuel than the axial pump. For this reason, mechanical damage is very common.
The radial pump can be damaged by even short operation without fuel. The pump is protected by a special system of chambers in the fuel tank - if you run out of fuel, the engine automatically shuts off. The pump ECU is integrated with the pump. Repair costs depending on the damage. Unfortunately, failure can occur at any mileage.

Timing system is considered to be the most expensive engine problem. The reason was the poor quality of the material. Initially, the camshafts after crossing 150000 km - 200000 km would be eaten, the camshafts had to be replaced, after solving this problem, there was a problem of cracking the camshaft. The problem of rapid cam wear was not limited to some versions of the engine in the final years of production.

2.5 TDI V6 engines made up to 2001 are considered to be worse than later engines, later the design of the engine elements changed and failures became rarer.

The 2.5 TDI V6 is having problems with the crankshaft-driven oil pump. After a certain mileage due to damage to the pump drive, the engine remains grease-free. Clogging of the oil pump can occur, the scrapes of the camshaft being eaten (worn out). Clogging of the iberlauf can also occur, resulting in high pressure in the crankcase and oil breakthrough on the seals and seals.

This engine never had a particulate filter, and the EGR valve only appeared in versions that meet the Euro 4 standard.

Volkswagen quickly noticed failures on the 2.5TDI engine and gradually eliminated them, but never managed to do this until the end. 2002. injectors changed. 2.5TDI V6 history but, in particular, we should mention the extensive redesign of the unit. For the 2004 model, the timing system changed completely. The engine was withdrawn because it was unable to meet the Euro 5 standard.

Analyzing all the problems that have occurred in the 2,5 TDI V6 engines, it can be concluded that this is one of the worst (for durability) engines, designed by Vw in recent years. In addition, it often occurs in tandem with an automatic transmission, which can become defective over time and whose repair is expensive to repair. A tip for any driver is that they should stop in a large car arch with this engine.

2,5 TDI V6 engine with 150 hp .should be avoided. Newer versions with 155 - 179 hp are much better. Recommended for some of the 2,5 TDI engines, but only in a version that meets Euro 3 - newer engines are problematic.