What is this bunch of metal for?

The heaviest and largest single part of an internal combustion engine is its block. In fact, it is a piece of metal with many holes, channels and all kinds of openings. Assembling the engine starts right from its block. 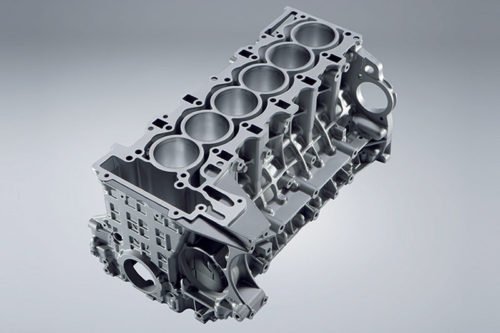 The engine block is in a way the "foundation" of the construction of the engine itself. Maybe not so much with its construction complexity, but the block deserved the title of the basic part, considering that practically all other engine parts are attached to it.

Its cylinders will thus accommodate piston rods (or liners), the lower part of the block contains the crankshaft bearing bushings, underneath is the engine sump, and at the top of the block comes the cylinder head. 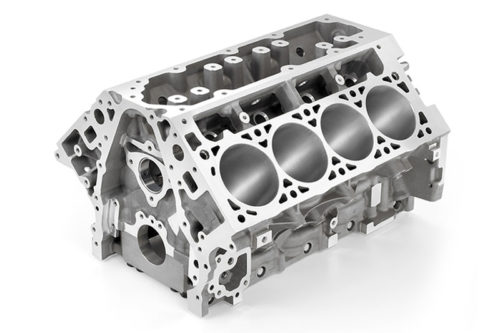 A piece of metal, full of holes…

Engine blocks are, today, almost as a rule, made of aluminum (the most common alloys are 319 and A356), cast iron (gray cast iron) or alloys of iron and other metals, such as nickel and chromium. Certainly, more and more engines in today's cars have a block made of aluminum alloys whose main advantage is lower weight. In addition, aluminum conducts heat more easily and such engines can be cooled better. However, as higher internal loads occur in diesel engines, cast iron blocks are still common today, at least in diesel engines with a smaller volume.

The very name "block" probably comes from the fact that this part of the engine is basically a pile of metal in which there are various openings, channels and holes. But, unlike a nice piece of Swiss cheese, the openings in the engine block are properly arranged. Thus, cylinder bores are placed in the engine block, as well as various holes with various threads intended for fastening other engine parts. The block also has channels (so-called "pockets") intended for the flow of coolant (for engines that have liquid cooling). 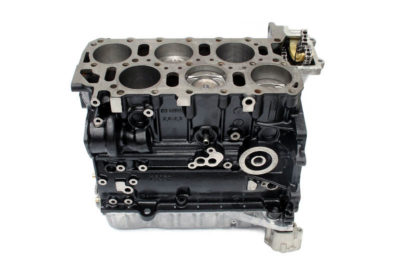 The following (basic) parts are attached to the machined engine block: crankshaft (which is attached to the underside of the block), pistons with rings and connecting rods which are connected to the crankshaft, the engine head (in which the combustion chambers are formed) and oil sump with crankcase. Of course, the engine block also serves as a "holder" for various other parts. An alternator (power generator), electric starter, coolant pump, etc. are also attached to it.

Also on the block are mounts that attach the engine to the car body. The new engines, after assembly, in the factory, get oil and go for a test run. However, this is only a short commissioning followed by a car installation. 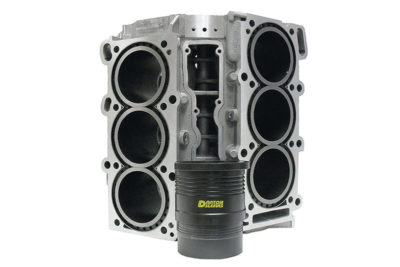 As already mentioned, the most interesting variation on the theme of the engine block is certainly the use of aluminum alloys. However, in addition to the mentioned advantages of lower weight and better (conduction) heat dissipation (compared to gray cast iron blocks), aluminum blocks also have one considerable disadvantage - low hardness.

As you remember, in the story about the cylinder and the piston, we also mentioned some cylinder liners. In fact, the piston with its rings "scrapes" on the inside of the cylinder, which must therefore be resistant to wear. In engines whose block is made of aluminum alloys, the construction without a sleeve would not be usable because a relatively soft block would wear out too quickly. Therefore, in such engines, as a rule, there are liners, either "dry" or "wet" (see clip article and cylinder).

However, there are exceptions, and the solution comes in the form of a magical material - silicon. Namely, silicon particles are very hard and some manufacturers insert them into the alloy from which the block is made. After casting, the cylinders of such a block are subjected to etching (acid etching) which practically removes an extremely small layer of aluminum from the inside of the cylinder, thus leaving hard silicone grains exposed. The piston can then slide over these beads with minimal resistance and wear. 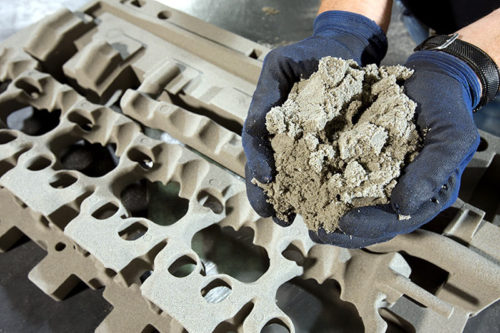 The engine block, of whatever material, is almost generally made by casting, in some of the different types of molds. The traditional manufacturing process for making parts such as an engine block is sand casting, a process during which casting into multi-piece sand molds is applied. In this type of casting, the internal openings of the engine block (eg coolant ducts, cylinders, etc.) are formed of compacted sand (in fact, a mixture of sand, clay and water).

After casting, this sand is shaken off, leaving free openings inside the block. The next stage in the construction is cleaning, after which it is time to drill additional holes (screw holes, lubricating oil flow…) and then machining the cylinders and surfaces on which other parts must fit precisely. 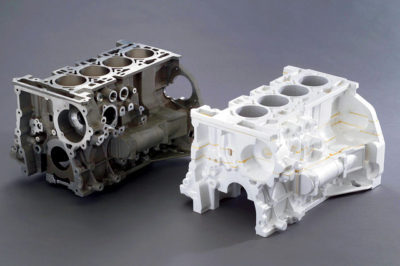 The evaporative model or ‘vanishing foam’ is a process that guarantees greater precision. On the left is a finished aluminum block, and on the right a polystyrene mold insert (in this case - 'positive') (General Motors)

Also, in the production of engine parts, the technique of casting with volatile models is used. It is a production process that uses the inner part of the mold made of volatile material, usually expanded polystyrene (it is a foam of 97,5% air and 2,5% polystyrene). From this material is formed (by casting in metal molds, cutting, etc.) the so-called. "Positive" casting, ie. creates a model that matches the physical appearance of what we want to get as a final product.

The foam is then immersed in a ceramic "coating" which creates a solid coating, but at the same time allows the release of gases created by melting the foam. Finally, everything is coated with compacted sand that serves as the mold itself. By pouring metal into such a mold, the volatile material disappears and its place is taken by the molten metal. The advantages of this method of casting are in the liquid dimensions and the absence of edges that are present at the joints of multi-part molds. One of the factories that is at the forefront in the development of such casting techniques is certainly the German Knauf Gypsum KG. 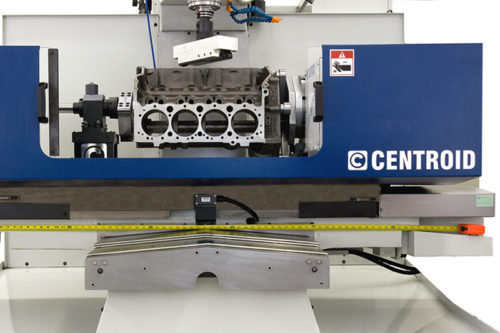 An exotic look at the subject of block making

Although the process is not fast, there is practically no finishing / additional processing. The disadvantages are the following: it is not possible to create curved channels inside the block (drills are flat), the production equipment is expensive (not that foundries are cheap plants, but the cost of casting today is much lower than using this computer-controlled milling machine) and as a byproduct a large amount of waste (but, with developed recycling techniques, this waste quickly becomes a new raw material).

Take a look at the process of making an engine block on a CNC milling machine in this video from the American factory Kirkham Motorsports. The final goal is an aluminum block of V8 engines with "wet" liners (thanks to which the construction of cooling channels is simplified). The engine has a volume of 7 liters, and the block that begins its life as a piece of aluminum weighing 175 kg, when completed has a mass of 29 kg: