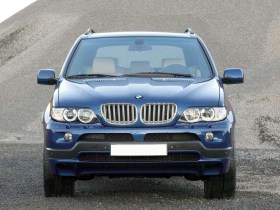 The Bmw X5 E53 takes the form of the previous BMW 5 E39 wagon with increased distance from the ground. The BMW X5 is shorter than the BMW 5, but wider and taller. With its direct steering and agile chassis and powerful engine, it relies entirely on driving pleasure.

The Bmw X5 E53 is more than a highly comfortable luxury family car. From front to rear, the vehicle carries all the usual BMW attributes starting from the double opening on the front hood, the same style of headlights…

BMW has spent most of its century developing brand identity. As one of the world's leading manufacturers of performance cars, many thought that the production of SUVs would upset their loyal customers. Fortunately, BMW did not create the SUV at all. In fact, the Bmw X5 is an SAV or "Sport Activity Vehicle". Take most of the functionality of the traditional Sport Utility, add a good look and a car with the performance of the BMW 5 - Series Touring (station wagon) and here you have the BMW X5. This Bmw X5 E53: Compared to competitors such as the Mercedes M-Class and even the Porsche Cayenne, it is an athlete in the SUV category. Its off-road capability is limited despite the raised body and standard all-wheel drive.

The safety equipment of the Bmw X5 E53 is complete with six airbags, ABS i ESP anti-slip system and various (optional) assistance systems. In the Euro NCAP crash test, it reached five out of five stars for passenger safety - TOP rating.

The Bmw X5 E53 is a benchmark in its domain, both in terms of production quality, performance and equipment. In the half-car market, the variety of models is great, though mostly diesel. The prices reflect the success of the model: very high, except for large petrol engines 4.4 l, 4.6 l 4.8 l and. In terms of reliability, the BMW X5 suffered from the shortcomings common to all BMW models of earlier careers, before making significant improvements. Today, worries are rare.

In October 2003, the Bmw X5 received a facelift, changes mainly in the front and rear lights.

BMW's first foray into the world of off-road vehicles has been successful. 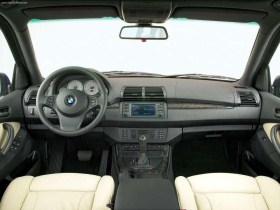 The Bmw X5 E53 gets the same attention to detail as any other BMW. The materials and workmanship are excellent and the comfort level is high. The interior of the Bmw X5 is quite flawless and simple and functional. As expected, each seating position provides plenty of comfort.

The safety equipment is complete with six airbags, ABS and ESP systems with various (optional) assistance systems. At Euro NCAP, the crash test has reached five out of five passenger safety stars.

The Bmw X5 E53 is very agile and agile. Its suspension has the ideal calibration: it is able to absorb inconvenient road conditions and deliver impressive handling capabilities

All BMW X5s have four-wheel drive, but during production it introduced a major change to the system. The 2000-2004 models are equipped with a system that distributes 62% of torque to the rear wheels and 38% to the front wheels. In 2004, the X-Drive system was introduced with the BMW X5 during the restyling, here 100% of the torque goes to the rear axle, but if necessary it can vary, the electronics distribute the torque between the axles in any ratio. 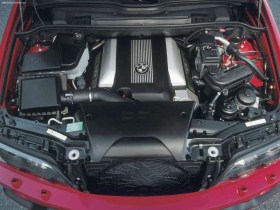 The most reasonable economical choice is the 3.0d turbo diesel version (218hp) under the hood and a manual transmission. It consumes a reasonable amount of fuel and manual transmission is permanent. In this case, the maintenance cost will be the lowest, assuming that no fault is characteristic of the turbo diezel. Performance enthusiasts should choose the V8 petrol version, the BMW X5 with the V8 engine under the hood is a real rocket. Avoid cheap copies of the LPG system. Only sequential LPG injection to avoid ruining technologically advanced and sophisticated BMW engines.

Diesel engines. On the suction side of the engine, plastic closures (valves) that regulate the flow of air through the suction branch, in the event of broken valves, can break into the engine and damage the interior of the engine.
Diesel Pump Injection Problems.
Frequent injector failures on 3.0d diesel engines, after 200000 km.
Flowmeter. At 3,0d by the end of 2002, the flowmeter may become clogged and cause power loss. It has to be replaced.
Turbocharger failures caused by an ECU program that allows more pressure than is safe for the turbine. Replace the turbine, reprogram the ECU, and thoroughly clean the turbo inlet and piping.
Idle vibration usually means a failure of the floating flywheel.

Frequent failures of the automatic transmission, manifested by heavy shifting and shifting of the gear lever. Required gearbox oil and filter change every 60 to 000 kilometers to prevent malfunctions.

Frequent wear of the wheel front bearings, heard at low speeds, like clicking.

Common problems with disc brakes, in some cases significant bending of the disc even at low miles.

Due to the weight of the vehicle and the sports chassis BMW The X5 intensively wears out tires, front suspension as well as brakes that wear out quickly when traveling fast.

Water penetrates the area of ​​windshields and headlights.

Electronics failures
Often a failure with the parking sensor.
Common problems with the operation of the taillights.
As with other modern luxury vehicles that have many electric consumers, the Bmw X5 E53 also frequently drains the battery.
The fuel gauge wants to show the wrong results.
Make sure xenons work well, repair is very expensive.
Breakdowns of electronic windows, electronically adjustable steering wheel, electric seat adjustment and electronic rearview mirrors. There are problems with the satellite navigation system and parking sensors.

Recommended models after face lifting in 2003 were of poor quality before.