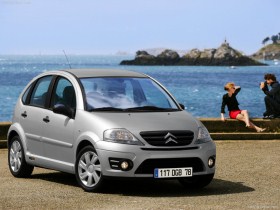 Replacing the 2002 Citroen Saxo, the Citroen C3 offered much more than its predecessor. As expected the suspension is much better. The biggest criticism of the Saxo was the lack of cabin comfort, but with its high roofline and wider wheelbase, the C3 has even more cabin space than its rivals.
This is exactly what makes the Citroen C3 a family-friendly purchase.

The Citroen C3 is a car that has shown that a toddler does not need to be sporty to be successful.

Those looking for an economical city car and rarely consider buying a Citroen C3. It's a mistake. The French proposal convinces with its functionality and relationship with the prices offered.

Initially, the offer was the only five-door variant. After almost 12 months, a two-door Pluriel convertible appeared.

All versions Citroen C3 are well protected against corrosion. 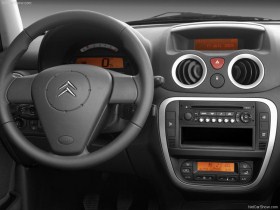 Citroen so far it has got us used to soft and comfortable cars. This time, that rule was broken. We're not saying this is an uncomfortable car, it's just not the French we're used to, so you'll feel some holes.

The design itself is not as spectacular as that of its bigger brother, the Citroen C4, but the car has some warm and peaceful looks that make it attractive especially for the nicer semi. The driver's position is quite high so visibility is at an enviable level, but this means that taller people will have little trouble settling down comfortably.

The interior of the Citroen C3 is also adventurously styled - which makes a change from all other manufacturers that seem slavishly imitating the products of the Vw concern. As a result, instead of a boring cabin, we have one that goes its own way, light and airy with low windows and bold lines.

The controls are logically arranged, the only impression being a digital board that requires a certain period of getting used to. The impression of being in the cabin is good, although, for example, there is not quite a lot of seats on the back bench.

Not even a trunk is commendable. This model was revised in 2005, and most of it was made in suspension, so newer models are much more comfortable than their predecessors. 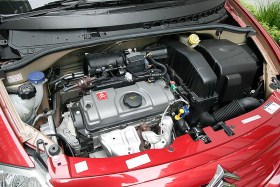 The Citroen C3 engine range starts with three petrol versions. If you are going to use this car primarily in the city for what it is intended, then 1,1 gasoline of 60 HP is sufficient for you. The average consumption is about six liters of unleaded gasoline which is satisfactory. We do not recommend it for any further travel as it is quite difficult and noisy to maintain a constant speed on the open road. In this case, there are 1,4 and 1,6 of which we recommend smaller ones because it is lively and quiet enough to work with.
There is a 1.4 8V, engine suitable for the city as well as for the road trip. The other two: 1.4 16V 90 hp and 1.6 16V 110 hp belong to the new generation. They guarantee good performance, clean exhaust, but turn out to be expensive to repair. A very common fault is their bobbin.
All gasoline engines are fitted with plastic suction. If you are thinking of installing LPG gas, only injection systems are recommended.

From diesel, 1.4 HDi and 1,6 HDi (68 to 109 hp) turbo diesel engines are built, which are powerful enough and very quiet in operation, but also much more expensive than petrol, and to achieve the fuel-saving difference needed is to go the extra mile, so the choice remains a green gun at the pump.
The problem with diesel is, first and foremost, an advanced common-rail system that is easily damaged by bad fuels, so repairing it can be astronomically expensive.
The safest choice is the weakest model 1.4 HDi. A typical mistake is nozzle wear. The symptom is the smell of the exhaust in the cabin and the characteristic sound of the engine. The 1.6 HDI version (regardless of power) has significantly more turbocharger, nozzle and float flywheel failures. Unfortunately, this is the price of communicating with the latest technology. The only sensible solution, it seems, is to be extremely cautious of controlling the car before purchasing it.

If you happen to come across an automaton, we do not advise it because the change of speed is very sudden, so quotes from both you and your companions are inevitable.

The interior of the Citroen C3 is not of the highest quality materials, so make sure that something is not broken or fall off. Be sure to check all the electronics on the car as well as the trap and suspension. That in principle would be that, if all this is OK, even if there are some minor issues, the repair should not be expensive.
If you decide on diesel, know that the 1,6 HDI is susceptible to pump failure, and this is one of the most expensive parts to repair. This is true of the first models, later Citroen corrected the error.

Engine 1.4 HDI 70 - may have a leak at the joints of the diesel injector and pipe, there is an odor in the cabin, it was necessary to replace the pipes and joints. A small series of the same engine made between May and September 2002 may have problems with the camshaft.

Sensodrive gearbox. There may be problems in the transmission, blockage of the transmission, especially in the reverse, there were numerous problems, it was the lubrication of the clutch grooves, or the replacement of the hydraulic drive. Sometimes just reprogramming the electronic transmission would allow the transmission to start working properly.

Citroen C3 often leaked oil from the powertrain from the initial production period.

Trap is quick to wear but is very inexpensive to repair, the most common replacement for a shoulder stabilizer clip.

There was a break (cracking) of the shock absorber springs.

Due to a failure on the CAN highway, screen, air conditioning, etc. may malfunction.

Plastics. At the beginning of production, it is easily scratched, badly shortened and sometimes rings hollow during.

Fuel gauge - displayed incorrectly on many Citroen C3s by the end of 2003 the electronics were reprogrammed and sometimes the fuel gauge was replaced.

The airbag light can illuminate unnecessarily, the problem is with the contacts in the connector, located under the seat.

Citroen C3 delivered between September 15, 2002 and January 15, 2003 called to eliminate the possibility of a line entering the ABS electronic unit and thus prevent the danger of a short circuit.

Departure issues. In some models manufactured up to 2005 there was a problem when the car was leaving, pulling it to the right. You needed to adjust the wheels again.

The plastics in the Citroen C3 are of very poor quality. After 2005, they tried to solve the problem, but to date, plastic has remained a weak point of C3.

Power windows. In several Citroen C3s manufactured up to 2003, there were problems with the power windows keys. It needed a replacement.

Air condition. On some C3 models, there are problems with the air conditioner. The air is blowing cold or warm, regardless of the cabin temperature.

Citroen C3 from the start of production were called for additional control of the power steering.

January 2010. Called a series of models manufactured between October 2006 and March 2008. The risk of the headlamp position is incorrectly installed in the car, and the headlights go off without driver intervention. To solve this problem, a reconfiguration of the lighting management software is required.

December 2010. Series of models manufactured from late April to mid-June 2010, equipped with 1.4 HDI 70. Risk of poor crankshaft lubrication. Changing the engine block was required.
Before buying a Citroen C3, see:
- interior, the quality of the interior is the biggest complaint to this vehicle. Plastic is very susceptible to wear.
- electricity, the central computer is prone to spoilage. Pay attention to the idle behavior of the engine, the transmission of power to the wheels and the lighting on the dashboard.
- brakes, check the front brake calipers and whether the car pulls to one side during heavy braking.
- door, check the protective rubber on the door, it is subject to deterioration.

We can safely say that the Citroen C3 ended its career much better than it started, things have been organized over the years, and since 2005 and the restyling, there have been fewer complaints.

The Citroen C3 represents the best Citroen car in terms of bugs, with the fewest. In terms of equipment package, the recommendation is SX, while gasoline engines are more popular than diesel.

When buying a Citroen C3, choose the ones with metallic paint, alloy wheels and air conditioning, as they will be easier to sell when the time comes.