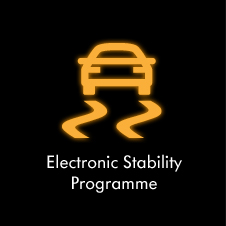 ESP (Electronic Stability Program) is a computerized active safety system that greatly protects the head of drivers who "get a little carried away" while driving. It also plays a big role on slippery roads.

The task of the ESP system is to increase the stability and controllability of the car by detecting and preventing the loss of contact between the wheels and the base. When the ESP system detects that the driver is losing control, it automatically brakes for the car to go where the driver wants it. The ESP does not brake on all wheels the same, but the brake force is applied to the wheels independently of one another. 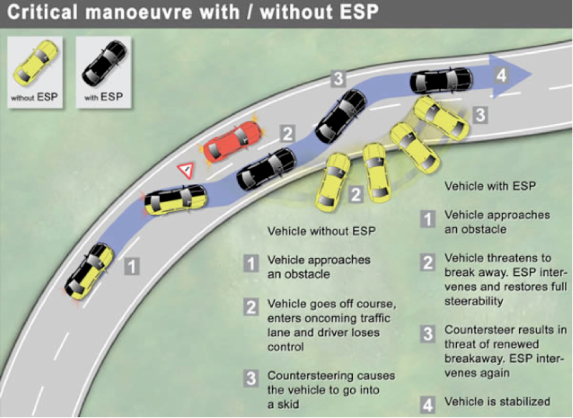 The electronic stability program strives to keep the car stable in all driving conditions. What made him famous and labeled him as very effective was functioning in extreme, critical situations. ESP has the ability to correct driver errors and react instead in potentially dangerous situations on the road. The primary purpose is to maintain the trajectory of the vehicle, ie, the elimination of any slippage, under or over steering (understeer and oversteer), and this is achieved by fitting into existing ABS and TCS systems. While for ABS we all probably know what it is, TCS stands for "Traction Control System" and has a relatively small role as an independent system - enabling adequate traction of wheels and ground, most often when moving from place to place. In other words, it eliminates their slipping, ie turning in place. With TCS, there are no more tire squeaks at a sudden start, but this system is much more important today, because it provides our ESP with significant hardware support. To this trio should be added the ECU as the main supervisory body in the car.

As you can see, ESP is practically not an independent system but consists of several others. Only simultaneous operation of ABS, TCS, ECU and ESP parts can produce results, where we can also add BA (Brake Assist) and EBD (Electronic Brakeforce Distribution) systems as relevant. The bottom line is that ESP controls the operation of the vehicle's brakes and engines. The operation of the brakes is controlled primarily by the ABS, but also by all of its associated systems (BA, EBD, etc.). Understanding the impact of a vehicle's stability system is very simple - imagine sledding down a steep slope covered with snow. On those ordinary sleds, of course, you don't have the steering wheel and you practically have to steer it through the ESP principles. To turn left you have to lower your left hand into the snow and make resistance against the ground, logically, the other way around. So you practically brake on the left or right side of your vehicle and change its direction. A similar thing happens in an ESP-equipped car. On the basis of a large amount of data from several sensors, it is through the ECU that instantaneously decides which wheel, i.e. which wheels and on which side they need to brake to keep the vehicle running its initial path as efficiently as possible.

ESP has the difficult task of dealing with two major problems: understeer and oversteer. Steering is a situation where the driver turns the steering wheel to the side but the car continues to move straight, or turns insufficiently. It can be seen as a loss of stability of the front end of the car. Reversing occurs when the driver suddenly turns the steering wheel, the car turns, but the rear end retracts too much and loses contact with the ground. 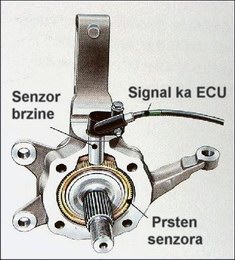 The ESP system is based on 3 sensors: a speed sensor on each wheel, a steering wheel position sensor, and a vehicle rotation sensor around its vertical axis. Based on the signals from these sensors, the computer determines the mode and intensity of system intervention.
The steering wheel sensor tells the computer where the driver is trying to steer the car. The vehicle's rotation sensor sends a signal at which angle the car is rotated relative to its vertical axis.
If the driver, while attempting a sharp turn, or avoiding an obstacle, turns the wheel, e.g. to the left, and the car continues to go straight (understeer), the computer will lock the rear left wheel for a moment. The car rotates and rotates around the locked wheel in the desired direction, restoring control to the driver.
After turning, the driver wants to correct the car, but "by giving a counter" it can happen that the rear end of the car gets carried away (re-steering). In this case, the ESP system will brake the front left wheel and maintain the direction of travel.

Numerous worldwide studies on traffic safety have unequivocally shown that this system goes hand in hand with inventions such as seat belts or airbags for efficiency. The biggest causes of fatal accidents are precisely those due to emergency situations and car slippage. ESP helps keep the vehicle on track, which specifically in the US has helped save over 7000 lives annually, which is about 30% fewer accidents with a tragic outcome! Of course, given the great control that this electronics take on itself, many drivers of predominantly powerful, sports cars have complained that they do not have complete control of the car and that ESP significantly reduces end performance. Several years ago, a compromise was offered in the form of a button that switched off the ESP system, or a computer tuning of the influence of ESP when driving at the request of the driver. However, these are extreme cases and of course it is advisable to keep it switched on, so in most models that are not designed for faster driving and do not have this option. ESP has been proven to save lives and it is definitely preferable to have it built into the car. You may (and God forbid) never see his work in action, but in extreme situations it certainly provides great safety to the driver and passengers, and is soon expected to be the legal standard for all cars sold on the market.