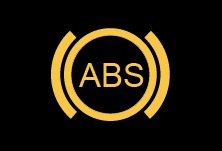 With the development of technology at the end of the twentieth century, there were significant introductions of many technical achievements in the field of automotive industry. Thus, cars, once complex assemblies of mechanics, hydraulics and rigid chassis became even more complex products with the introduction of electronics as basic equipment. However, the positive impact of electronics led to the development of various passive and active safety systems in cars. All today's cars have a built-in computer that coordinates the operation of the engine and other mechanics, hydraulics, and of course electronics. The small black box today represents the brain of every modern car, which controls and coordinates all the functions in the car. At the same time, one of the most important tasks of the central unit is to activate various electronic passive safety systems in order to drive safely and correct driver errors.

ABS, ESP, ASR, TSR, EDC, DSC, PSM, PTM… there are many such three-letter abbreviations that list the electronic passive and active safety systems the car has. 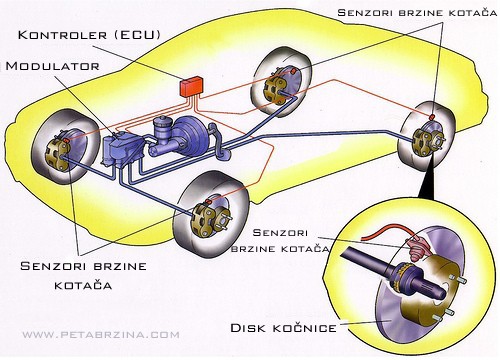 Anti-lock Braking System, or ABS for short, means anti-lock braking system. It is an electronic system that, with the help of sensors, closely monitors what is happening with the contact of the tire surface and, accordingly, whether there are conditions for blocking the brakes, controls and manages their work and behavior.

In 1964, with the financial support of Bosch, Teldix GmbH was able to construct the ABS-1 system - which successfully prevented the wheels from locking and thus managed to maintain the vehicle's handling.

Mercedes first, in 1978, begins serial production of the ABS-2 system. The first model to be honored to have this last word of technology was Mercedes' prestigious Series - S, but it paid extra, or was on a long list of accessories. After that i BMW it also lists ABS in its accessories list. Soon, all major car makers who meant something in the world were slowly starting to incorporate ABS into their models, initially as accessories and later as standard.

How does ABS work? 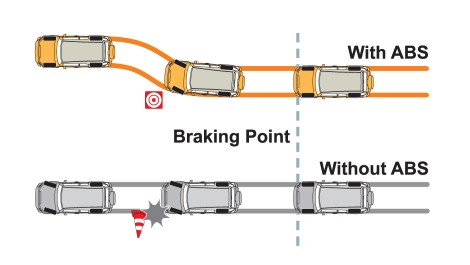 The Anti-lock Braking System consists of a hydraulic modulator (control valve) with control electronics (central unit) and a wheel sensor. It works by having wheel sensors constantly gather information on the power of the braking power.

As soon as the wheel is rotated, the sensor sends this information to the ABS system processor, which sends feedback to the hydraulic system to close the solenoid valves and thus restores maximum braking force until the wheel is locked again.

The systems are adapted to repeat the pressure change operation in the brake line as often as possible in a unit of time so that the wheel is locked and unlocked several times during one full turn. The operation of the ABS system is manifested as a brake pedal pulse, which all drivers should be aware of so as not to be confused at a critical moment and possibly reduce pedal pressure.

So, in critical situations the pedal should be pressed with all its force and the rest will be taken care of by the electronics. And of course, the steering wheel should be turned to avoid obstruction.
Recently introduced new ABS systems in prestigious car models eliminate the brake pedal pulsation.

In translation, the Anti - Lock Braking System is activated at the last moment before slipping, so there is no need for metered braking, which helps young drivers the most. Insufficiently experienced drivers today can brake extremely hard with the help of ABS, without compromising their driving safety, as is the case with vehicles without ABS. On slippery surfaces, rain, snow and ice, the Anti - Lock Braking System is invaluable, because even experienced drivers happen to have a car slip. It is not necessary to emphasize how dangerous that can be.

How does a vehicle with ABS behave?

It is widely believed that cars equipped with ABS automatically have a shorter stopping distance, which is not true. Specifically, the length of the braking time is extended, as is the stopping distance, even by 5-6 percent, compared to the same car without ABS, measured in ideal conditions. But, in ideal conditions (dry and good road), the ABS unit will never activate unless faulty.

There are four basic components to a single ABS system:

ABS speed sensors
The ABS system needs some way of identifying when a wheel is locked, ie. stopped turning. These sensors, located at each wheel individually or in some cases within the differential, provide this information.

Valves
There are valves in the brake circuit (in the pump housing) that dose the braking force and are controlled by the ABS control unit. On one system, the valve has three possible positions:

Pumpa
Because the valve allows the brake to be depressed, there is some way in which that pressure is leaked back. And that's what the pump basically does; when the valve reduces the pressure in the circuit, it is the pump that takes the back pressure.

Regulator
The controller is actually a computer in the vehicle. He monitors the speed sensors and controls the valves.

Functioning of the ABS

There are many different types and control schemes for ABS systems. We will consider how one of the simplest functions works.

Control system (controller) continuously receives data from speed sensors, taking into account irregular deceleration to a point that is out of the ordinary. A moment before one wheel blocks, he will notice a sudden slowdown. If, for example, it remained unregistered, the wheel would stop rolling in a much shorter time than it would take for any vehicle to stop. Under ideal conditions, the car would need to stop for five seconds at 60 mph (96,6 km / h), while one wheel would be enough for less than a second to stop turning (ie to lock). ).

The ABS control system “knows” that such a sudden deceleration is not possible (not normal); and therefore reduces the pressure in the brake circuit of the locked wheel until the moment when its acceleration occurs; then the pressure increases again until a (critical) deceleration occurs. The system can perform these changes very quickly, before the wheel significantly changes its (angular) speed, ie. rpm. As a result, the wheel slows down at the same pace as the car, while the brakes "hold" the tires very close to the "operating point" where a blockage can occur. All this gives the system maximum braking power in these specific conditions.

When the ABS system is activated, the driver will feel the vibration of the brake pedal at their feet; this is the result of the quick opening and closing of the valve. Some ABS systems can repeat the cycle up to 15 times per second.

Anti-lock systems use different schemes depending on the type of brakes in use. We will look at them by the number of channels (that is, how many valves are individually controlled) and by the number of speed sensors.

Three-channel, three-sensor ABS
It is usually found on commercial (delivery) vehicles with ABS on all wheels. It has speed sensors and valves for each of the front wheels separately, but with one sensor and one valve for both rear wheels. This rear wheel sensor is located on the rear axle.

This system provides individual control of the front wheels, so both of them can provide maximum braking force. The rear wheels, however, are controlled together and can be locked simultaneously before the ABS is actuated on them. With this system, it is unfortunately possible for one of the rear wheels to be locked (one with a lower grip) while stopping the vehicle, thus reducing braking efficiency.

This system is easy to identify. Usually, one arm of the brake assembly will pass through the T-connector, where it will fork to both rear wheels. The speed sensor can be located by searching for electrical contact near the differential on the rear axle housing.

ABS distributes the braking force to the front and rear axles. In this whole system, the sensors are very important, and there are sensors that monitor the rotation of the wheels, the ring of the signal sensor and the unit that processes the signals and controls the entire ABS system. Today we know two types of sensors and three types of signal transmitters. One type are analog ABS systems with inductive sensors, and the other are modern, magnetic systems with magnetic signal transmitters. Analog ABS systems are quite large and have considerable voltage spikes that are recorded in the ECU of the ABS system. The more such jumps, the higher the speed of the wheels. The sensors must react to the ring, and in order for that to happen, a certain air space is needed, between which there must be about 0,6 millimeters. It is in this part that a fault usually occurs, because the distance is disturbed and in that case the sensor does not catch the sensor, it does not give the correct signal. These old sensors can last a long time and some are older than 15 years, and then they simply fail. 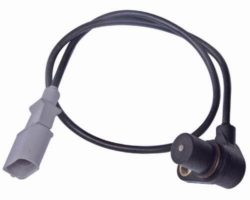 When we talk about modern ABS systems, they have a lot of small magnets on the ring that are so complex that they exchange the north and south poles, and the sensor records all that. This type of system can also be checked with a multimeter, but the correct resistance is 1600 Ohms. With them, the distance between the sensor and the encoder is much larger, it is around 4 millimeters, so their field of tolerance is wider.

As the technology in cars is constantly evolving, it should be noted that there are also ABS systems that have sensors that are integrated into the bearings, making the whole system much simpler.

Practice shows that the sensor is the most common cause of failure on the ABS system, and its replacement is easy and not too expensive.