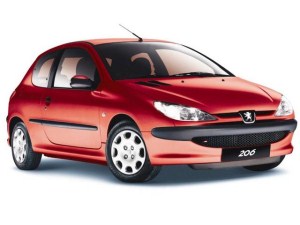 Peugeot The 206 is certainly one of the more popular supermini, and for a reason. Looks great, plenty of engines on offer and great HDI diesels. The interior of the Peugeot 206 is not as appealing as the exterior, but it is nothing special. The driving position is not ideal, and many electronics problems have been reported, especially with the central lock. Be sure to check the condition of the brake system.

Creating a successor to the Peugeot 205 was a real nightmare for even the most responsible at the top of the French company. It took too many years to wait for the successor of the model who won titles in rally and Paris-Dakar races. The financial position of the French lion was also not great, so the success of the Peugeot 206 was crucial for the independence of the factory. And then the first European city car with cat eyes was designed.

To present a worthy successor to a Peugeot 205 that was produced for fifteen years (1983-98) with more than 5.2 million units produced and for the steering wheel of the Vatanen, Cankunen and others brought titles in the World Rally Series and the Paris-Dakar Rally during the eighties, it seemed difficult to do.
However, with the unique body shape and bold design details that formed the basis for developing the concept of later models 207, 307 i 407, then high quality workmanship and reliable units, the new Peugeot 206 that appeared during 1998, the success achieved was above all expectations. It has long been a "bestseller" in many European countries.

"Love at first sight" with the driver of this four-wheeler can subside behind the wheel. Namely, many complain that the position of the driver's seat in the "Peugeot 206" is not very ideal, so the arms and legs are often in an inappropriate position, especially when it comes to taller drivers. The cabin does not provide enough space either, so only the trunk has a good size and the correct shape.

The huge popularity of the Peugeot 206 is no coincidence. Attractive, timeless style, successful design, high for this class of vehicle driving comfort, good handling and maneuverability, and a nice variety of engines (including diesel fuel consumption) - that's what the "two hundred" can suggest. 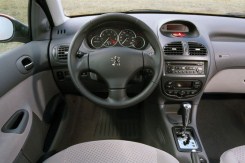 Peugeot 206 is a nice car, most people like it at first glance. Those who fall in love with his appearance will forgive him for any shortcomings.
Say, the first thing most people complain about is the impossible to find the ideal position behind the wheel. The seats do not provide enough support, and the arms and legs are in an unnatural position constantly, especially for slightly more drivers.
The cabin itself and the space it provides are not at an enviable level, and the colors and materials are much better than the competitors in the class. At least the trunk is of good size and proper shape so there are no objections. The sense of drive itself is not bad, even sometimes it's fun.

The interior of the Peugeot 206 is rounded with skill and the central ridge has a spherical shape. The position of the speakers in the front door panel is specific. Efforts were made to ensure that the front passenger's knees were as wide as possible. A unique solution was applied with the door trim tightened in the part that continues to the instrument panel, and in the width of the passengers' hips the formwork was inflated to accommodate speakers and a pantry.
The instruments are clear and all keys are within reach of the driver. Even the position and size of the power buttons for all four flashers were thought of. Only someone can find it difficult to adjust the height of the steering wheel. Complimentary are the sport-shaped front seats, which are comfortable yet well-curved.
There is only enough space on the rear bench for two adults. The latest specimens of city cars give a little more space to the knees and heads of passengers in the back. However, this detail can only be understood as a disadvantage for families with adult children. However, for them, too, the French made a solution. Wagon version, with slightly higher roof. Should Peugeot 206 CC be mentioned? So, something for everyone. For the young hatchback. For those who want to rejuvenate and impress the environment with a convertible with a metal automatic folding roof. For those who think of birth - a caravan.

Visibility is good, and like almost all new cars, the front end is not fully visible. Some days of adjustment, and any average driver will feel the dimensions of the Peugeot 206. Manual exterior mirrors that could be manually adjusted from the cabin could have been a little larger.

In 2003, the Peugeot 206 was slightly redesigned and refreshed. Spoilers and light panels have been redesigned, the instrument panel backing is now white and more sporty, and more quality interior materials have been applied.

Sound insulation in the interior of the Peugeot 206 is efficient, although the diesel engine is somehow muffled, evenly spinning, both at acceleration and at lower revs. There are no signs of wear and tear on the front and rear seats, the steering wheel and transmission levers are preserved, and there are no unpleasant "creaking" plastic components while driving.

The rear seats of the Peugeot 206 are comfortable, but still have insufficient space for relatively tall passengers, while the luggage compartment volume is 245 liters on average. 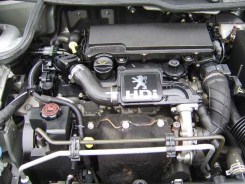 The range of engines installed in the Peugeot 206 is large, so anyone will find what they want, whether petrol or diesel.
From gasoline it is recommended 1.1 or 1.4 who quite well do their part of the job in the city crowds, which is what this car is designed for. The average consumption you can expect is about 6 liters of unleaded gasoline. There's also the angry 2.0 GTI variant for those who like the small town buzzers that this 180-horse Peugeot then becomes. Everything has its price, so consumption in this case is rising to almost eight liters of gasoline.
From the diesel engine was initially put 1.9 D, which we know from the model 205, and after 1999 was replaced by HDI engines that deserve every praise. So, if you decide to be a diesel engineer, the right choice is HDI. They are much quieter and quieter at work, and their consumption is almost the same, if not less, than conventional diesel injected pump diesels.

However, in addition to the design, the main asset of the Peugeot 206 1.4HDI in comparison to other sister versions and the competition is the common-rail turbo diesel engine of 1398 cm3 and 68 hp, which in the test in urban driving conditions, proved frugal. extremely resilient and crisp when needed.
According to the factory data, the top speed is 168 km / h while consumption in the city is 5.5 liters of diesel, though it exceeded 6 liters during the test with a slightly more agile driving. With a tank of 50 liters, with a consumption of 5.5 liters, it is possible to travel almost 900 kilometers.

Now let's go back to Peugeot 206. If he's nice, then he'll surely forgive you for not having the most reliable mechanics, the seats collapse relatively quickly, and the ventilation system sometimes causes a headache.

Almost half of the problems that drove the Peugeot 206 into service related to electronics, so take a good look at every half of it on the market. What is good is that even when something goes wrong, repairing itself is not generally costly. When you're already looking, check out the discs and the wear and tear of the tiles, especially on the GTI models as they get hot and drive.

After 10 years of Peugeot 206 career, it was really surprising that Peugeot 206 still faces major reliability issues.

For those opting for Peugeot 206 seniors, it should be noted that the first Euro 3 units were introduced to the market in 2000 together with the existing Euro 2. Since 2001, the Euro 3 regulation has become a valid standard for all manufacturers within the EU. hence for Peugeo.

In the end, according to the service provider, the maintenance costs for the Peugeot 206 1.4 with a turbo diesel common-rail engine are not higher than the gasoline 1.4 unit, so deciding what to choose depends on the preferences and needs of the customers themselves. The Peugeot 206 1.4 HDI is the right choice for drivers who expect the city car to have reliability, solid performance, low consumption and affordable maintenance costs with sophisticated style more appropriate for the upper classes and the comfort that goes with it.

Two-valve engines per cylinder have chronic oil leakage from the head. Very often there is a problem with the engine cooling fan, failure causes the engine to overheat.

Gasoline engine. The fuel tank is empty and the instrument panel shows that there is 1 fuel in the tank, reprogram the ECU of the engine, upgrade the software.

Gasoline engine. After starting, it goes off and then goes off, so the abbot immediately turns on himself, check all the engine compartments and clean them. Also, if the cars turn off after the headlamps are switched on, check and clean the masses behind both headlamps.

HDi engines are very sensitive to impurities in the fuel (water + dirt), the engine runs erratically, but can also cause severe pump failure.

Peugeot 206 1.4 HDI 70 hp. Certain Peugeot 206 leaks fuel from the fuel return pipe; the problem is solved by replacing the gasket and further tightening the pipe.

Peugeot 206 1.4 HDI. Bad idle when the engine is cold. Check all components, if components are correct, re-program the engine ECU.

On manual transmissions made up to 2003, it is difficult to shift to a lower gear because of poor bearings.

An automatic transmission at 1.6 16V may not work, it will require reprogramming or valve replacement.

On models manufactured between September 2001 and January 2002, there are problems with the steering lock.

The airbag light is often lit due to problems with the connector under the seat. Soldering required.

Poor radio reception in models by 2003.

The lights. Possible presence of backlight condensation by 2003.

Shock absorbers. Premature wear of the front shock absorbers can cause them to leak. They need to be replaced.

Peugeot 206 with three doors. The rear seat folding lever is fragile, it can break.

Solidly made and well protected from corrosion.

Frequent inability to bend the front seat mechanism in the three-door version.