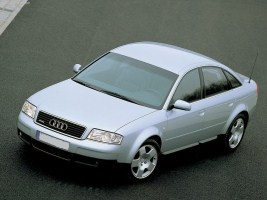 Just three years after replacing the long-running 100 Series with the sleek Audi A6, Audi has once again raised its competition with the highly innovative and striking style of the next-generation Audi A6. The Audi A6's new bold look will no doubt be what draws most people's attention to cars.

Great cabin, quiet engine operation, and noise minimized - makes a car for longer trips. Not exactly a sporty ride, but the Audi A6 isn't even meant for that. The model is recommended after the restyling, when it was done on the suspension, and be sure to check the electronics, especially the windows and lights.

The career of the Audi A6 model coincided with the darkest years of the brand in terms of reliability, especially from 1998 to 2003. The overall quality of construction was never sloppy, some elements mounted showed weaknesses, improvements sometimes came slowly. So, be careful before buying: even if the car is extremely good - which is usually the case, because the body and interior finish is exceptional - the purchase can be a trap, with the frighteningly high cost of replacing this or that defective element. In the labyrinth of version numbers and a large number of potentially perishable things, it is not easy to choose which model to avoid. Some versions of the Audi A6 are always to be avoided, due to poor reliability, and all models with a continuously variable automatic transmission "Multitronic" are certainly very pleasant on paper, but that has never been an advantage of this model.

It looks good, very well built, spacious, comfortable and sophisticated. Subtle is the only way to describe the Audi A6, and it can be positive for many buyers. Choosing an Audi A6 means you have decided not to join the BMW / Mercedes audience.

The Audi A6 has earned a solid reputation for being a solid, business-style vehicle. Even better for the Audi A6 is that it is not as expensive as the rivals of the BMW 5 Series and Mercedes E Class.

The Audi A6, which was the first model to use the "A" in its name, was launched in June 1994. Offered as a sedan and station wagon form, it had a major overhaul in 1997 and remains an extremely important model in Audi's offering. The Audi 100 has been refreshed and converted into the Audi A6. The exterior has largely remained the same as the engines, until 1997. The Audi A6 came with several different two-diesel engines and many of them available with four-wheel drive, Audi’s quattro drivetrain. It belongs to the upper class of limousines and caravans, it competes directly with models such as Mercedes - Benz E-Class, BMW 5 -Series, Jaguar S-Tipe, Lexus GS i Volvo S80.

Although not as widespread as the Audi A4 in terms of sales, the 1998 Audi A6 provides a great luxury vehicle with a great list of standard equipment that can be further enhanced with options. The Audi A6 competes with BMW and Mercedes-Benz counterparts. Overall, the Audi A6 shows an improvement over the Audi A4. Both vehicles share a similar style and a large selection of engines and bodies. The Audi A6, however, adds more standard features, a larger range of optional features and a larger more spacious cabin. The Audi A6 makes a good luxury vehicle. It also serves as the most logical upgrade for the Audi A4 in the fleet.

DESIGN AND INTERIOR - Audi A6 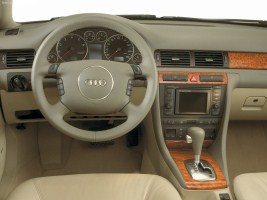 The Audi A6 stands for elegance, reliability, power, practicality and versatility. The interior is designed perfectly, the quality of the material is at the German level. There is plenty of space in the front, and the rear can comfortably accommodate three adults. The driver and front passenger sit in large seats and hold the body tightly. The people driving back are well taken care of, the Audi offers plenty of legroom and headroom. Three seat belts are standard at the back, as well as three height-adjustable head restraints.

What's the downside to the Audi A6 is its agility. Compared to the BMW 5, it's kind of lazy and annoying. So, if you are looking for sports performance and driving pleasure in the beginning, do not buy this used car. Also note that the noise in the cabin is minimized both in the city and on the open road. After 2001, a restyling was done when a lot of the suspension was lost.

Although the Audi A6 has no rear seat overlap, the boot is roomy, long and wide, and the floor is flat. 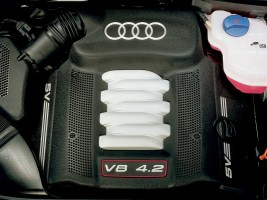 The Audi A6's wide range of engines starts with 1,8T four-cylinder petrol. Decent choice, same as 2,0. However, with the Audi A6 come the best V6 engines available with 2,4, 2,7T, 2,8 and 3,0 liters of displacement. The average consumption for V6 engines is around 8 liters of unleaded petrol, according to the factory, but keep in mind that this in the city can increase dramatically. The largest gasoline is the V8 4,2L and it is not recommended due to its very high registration and huge consumption.
If you are looking for a moderate variant, there are also diesel generators that turned out great. The 1,9 is the smallest, and there are two V6 2,5 TDIs. The average consumption is about 7 liters, and these engines are great to pull.

The energetic 1.8T is a better choice than the 2.0-liter petrol which is a bit weak and slow. You will not be disappointed by any other engine although the 2.7T with 230 hp is a particularly good unit and gives good results, there are also 2,4 - liter, 2,8 - liter and 3,0 - liter engines. As for the diesel the 1.9 TDI is the choice for everyday situations, but if you regularly tow or carry a heavy load then the 2.5 TDI (it was available in 155 hp, 163 hp and 180 hp) is a better choice.

The average Audi is offered with two diesel engines in multiple versions. The famous 1.9 TDI engine, which appeared in versions with 110, 115 and 130 hp. With a consumption of 6 - 8 liters of diesel per 100 km, the only problems can be caused by a turbocharger.

On the other hand, there is an even more powerful 2.5 TDI engine with 150 hp, 163 hp and 180 hp. Although it provides really good results (a sprint from 0 to 100 km / h can take less than 9 seconds, and unlike the 1.9 TDI it is available with quattro drive), but there is no such good reviews. Consumption of 8-10 liters per 100 km is acceptable, but drivers complain about the failure of some components, the short duration of the toothed belt and the camshaft. The younger Audi A6, after the 2001 facelift, is obviously less prone to breakdowns.

All models except the 2,0 petrol and 1,9 TDI are available with Quattro four-wheel drive.

If maintained on a regular basis, no Audi A6 should cause you much trouble. So the most important item is the service booklet. In the event that regular services are not done on time, you run the risk of buying a car that will require a lot of investment, and in Audi's case it's not cheap at all.

Engine problems. In the case of the popular TDI, typical flowmeter damage, high-pressure pump failure (sensitivity to the use of quality fuel), neglect of regular and expensive maintenance (gear belt replacement) of engine failures, the consequences of which are very costly to remove. TDI diesel engines are attractive because of their low fuel consumption.
Audi A6 engines have problems with coolant leaks from the water pump and problems with the oil pump due to the turbocharger, as well as minor malfunctions of the temperature sensor (fan not included) and blocking of the thermostat (overheating). However, they can lead to serious consequences - burnout of the cylinder head gasket or even engine failure. Problem with EGR valve (requires regular cleaning). A test drive at the time of purchase is therefore needed to check that the engine is idling and does not raise the temperature. It is necessary to look at the engine after driving, because engine oil leaks on the A6 occur very often.

All 1.8 20V turbo engines made from August 2001 to October 2002 can suffer failure or more than four bobbins, leading to a dispute between VAG and suppliers.

V6 gasoline engines with 12 valves. They tend to consume a lot of oil in the beginning of exploitation. Without any serious consequences.

2.8 V6 with 12 valves. Some cases of coolant leakage through a V-shaped branch under the suction branch.

In the case of a six-cylinder V6 petrol engine, it is necessary to pay attention to the level of oil consuming the oil. In other gasoline versions, oil and engine oil leaks frequently.

The submersible pump in the gasoline tank knows how to cancel, especially in winter, because of the water in the fuel.

TDI engine. On diesel by spring 2003, a gradual decline in power of 6 km. It can eventually lead to a complete absence of acceleration above 000 km / h. Caused by dirty air flow meter. Do not clean it, replace it.

Engine 1.9 TDI. They tend to consume a lot of oil in the beginning of exploration. Without any serious consequences.

1.9 TDI engine 110. On models manufactured until June 1999, it decelerates anarchically when idling. Caused by a problem in the ECU of the engine.

Catalyst. The TDI 110 produced until May 1998 had very early destruction of the catalyst (internal ceramics), sometimes with 25 km. Replaced on most cars.

Power loss on the TDI 90 hp - 110 hp over 3 rpm can be solved by replacing the small hose that goes from the turbine to the ECU.

The turbocharger can be damaged by models with a 2.5 V6 diesel engine, and failures have been reported on the air flow meter.

Optical headlights. Especially on models manufactured until May 2001, headlight vibration. The phenomenon is also expressed in models with optical xenon.

Window lifts. All models, especially those manufactured up to 2001, have a recurring problem with window lifts.

When it comes to the failures of electrical and lighting systems, many users complain about the need for frequent replacement of light bulbs.

Sometimes the fuel gauge and engine temperature do not work, the service technicians associate this with the return of mileage.

Regular check of the ventilation chamber, ie. water drains. If the drainage is blocked by leaves, the water will have nowhere to go except the car, which can cause electrical and electronic problems. Gasoline engines may have an additional problem, water blocked in the ventilation chamber, ie. water drain, water can enter the brake servo, cause rust inside and brake the car hard. This water can be sucked into the engine if the servo diaphragm loosens.

A rather strange occurrence of the C5 is the collection of water in the battery container.

The main and most common problems with the Audi A6 is the front ladder. The complex trap of the six can be problematic, especially the upper oscillating shoulders (4 on each side) and the stabilizing shoulders.

It is not uncommon for the labels on the onboard computer display to disappear.

At the outset, there were defects with the ABS control unit.