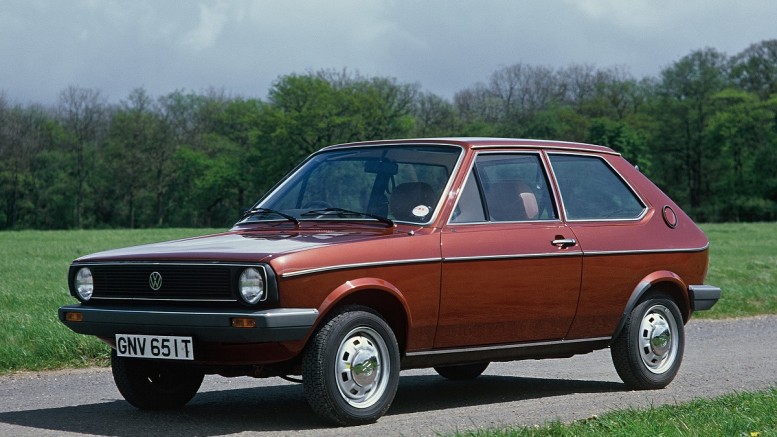 Today, the Volkswagen Polo is an example of a desirable and commercially successful car, which holds its price as a second-hand vehicle, and together with the Golf and Passat makes a long-standing trinity of successful legends from Wolfsburg. Therefore, it sounds almost unbelievable that the beginning for Polo was not easy at all, and that the factory itself was on the verge of survival at that time. Too long an insistence on forcing the outdated Buba and its versions almost buried Volkswagen and the factory found itself in the early 1970s in a position to completely change its image in a short time and create cars that would attract customers with a modern concept and look. Fortunately, they had technological knowledge, acquired through purchase Audi and NSU, which, paired with traditionally rigorous quality control, known since the air-cooled models, will create a combination that will bring VW to where it is today. The record loss in 1974 meant that Rudof Leiding had to leave VW's head, and successor Toni Schmücker would reap the benefits of his ideas and plans. Passat, Golf and Scirocco were full of hits and instant hits, but the first Polo will not reach their success. 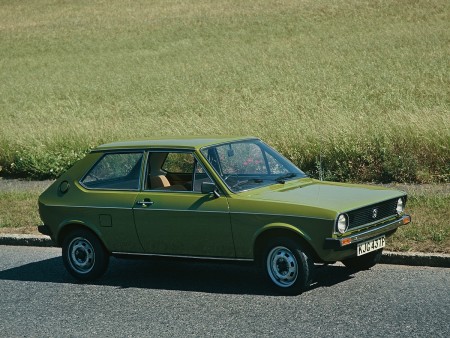 The car was presented in Geneva on March 13. In 1975, deliveries to customers began in May, but sales were immediately quite low. Part of the problem certainly lay in the fact that it was visually identical, and significantly better equipped Audi 50 has been on the market for five months now, so customers did not perceive the toddler as a real Volkswagen. The bigger problem came from the parent company. For a number larger the Golf was a more serious, visually appealing and much more popular car, and the base model was not much more expensive than its smaller brother. Audi’s home design, with Bertone’s small but media-overemphasized help (which actually added only a round cover on the c-bracket and a side line lift at the rear end) was appealing, but not timeless like the Golf or Renault 5. Both cars, and the Passat, Fiat 127, Ford Fiesta… were sold in significantly larger quantities, making the Polo an outsider both in the VW range and in its class. 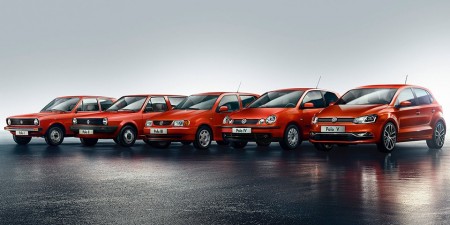 In our country, the first generation was quite a rare bird, and Polo and Derby were available only for foreign currency, and thus significantly more expensive than the Golfs assembled in Vogošća. By the end of production in 1981, just over half a million units had been produced, heralding the beginning of a tradition of sales problems with the smallest national cars - and later Lupo and Fox models would be faintly accepted in the European market. The pre-Spartan equipment of the basic models did not help to develop the image, nor the lack of a sports model - it was not until 1979 that the Polo GT arrived with 60 hp. 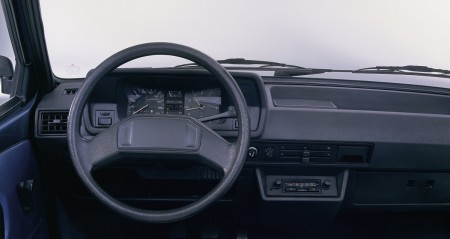 The level of equipment was similar to that in the simultaneous 'spar-Käfer', the base model of the Beetle 1200, and besides, most of them were in boring shades like olive green and ocher. The relative unpopularity has continued to this day - these cars are quite rarely seen at oldtimer meetings, and at specialized meetings of Volkswagen fans they are in the shadow of more popular models. Audi 50 enjoys somewhat greater popularity, as a rarity and a kind of anomaly in the history of that factory, and the greater attractiveness of the factory color palette is not negligible. It was only after the cessation of production of the Audi 50 in 1978 that the Vw Polo began to receive more equipped versions. The plastic bumpers arrived at the Polo and Derby with an ugly facelift made in 1979. Despite all of the above, the first generation Polo is a significant car, not so much because of its virtues but as the founder of a lineage that conquered the market in these 40 years. not yet showing signs of fatigue. Let us recall briefly the end of the story and related models. 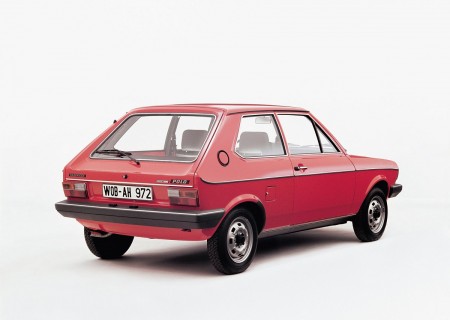 The Audi 50 was the forerunner of the premium toddler class. Although the Ingolstadt factory was a competitor to Opel and Ford on the market in the 1970s BMW i Mercedes, yet many were surprised by her entry into the smallest class. The presentation of the smallest Audi was on October 26.10.1974, 50. In fact, after the purchase and connection of the NSU factory, Audi continued to develop their, given the range of models of the much more logical project K80, which was conceived as the successor of the popular Prinz in our country! The shape was signed by the great Claus Luthe, the designer of the NSU Ro 50. The Audi 1978 was not cheap for the class, but it proved to be solidly popular. By the time the 180.812 model was shut down, 50 would have been made. The offer included engines of 60 and 1 hp, and the equipment was much more luxurious than in the Polo, but also to other competitors. It was the first German car of the increasingly popular city 'supermini' class, and we can consider today's AXNUMX as the spiritual successor.

The three-volume Volkswagen Derby was Jette's forgotten announcement today. Audi planned to introduce the 50 sedan, to bring it visually closer to the rest of the range, but bosses decided the model would come out under the VW badge. Introduced in February 1977, it already found 72.412 customers in its first season, which was more than Paul! The first generation was sold in just over 300.000 copies, and there is a successor. In 1985, the name faded, but the spirit still lives on in the model we call the Polo Classic. A few years after this model, which probed the terrain, the Jetta and Santana arrive, because VW is convinced that there is still a significant market for classic three-volume models. Only the back end was different, everything else was both visually and mechanically exactly the same as Paul. 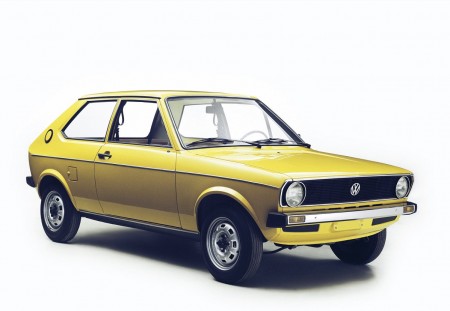 For the Brazilians, however, it was developed VW Gol, a kind of Golf without the letter 'f' on the mechanics of its smaller brother, an unparalleled South American bestseller. Although he will actually share the platform with the European Polo only from the third generation from 2008, the first Goal from 1980 reminds us visually of him, with simplified mechanics, and even Buba's parts. This phenomenon, which has already sold more than 10 million copies on the green continent, is almost unknown in our country. It has been the best-selling car in Brazil every year since 1987.

In Europe, Polo owes its popularity to its successor, the second generation has achieved everything that the first did not. Persistence pays off, and smart mistakes don't repeat themselves: the second Polo, introduced in late 1981, became one of the most popular small cars on the market and remained on offer with only one major redesign until 1994. The small station wagon was a modern interpretation of Trabant 601 Universal . A much more thoughtful and adult car, in the varied offer of inversions, hides a forgotten pearl, the loaded G40 compressor model with as much as 113 hp. With the third generation comes a radically different design, whose traces without too much brainstorming we recognize in the current model of the fifth generation, while the first two remain independent, still insufficiently recognized classics.

Previous: High-mileage car - should we be afraid of it
Next: Automatic Parking System - How Does It Work?