Proper breathing and movement of gases inside the cylinder

The valves are located in the head of the engine, its upper part, which also contains channels for supplying the mixture, ducts for combustion products, thread for spark plugs, etc. The camshafts and a few more engine parts, equally unusual in appearance, take care of the valve opening.

His Majesty - the valve

While it is not about anything like valves like opening water on the sink, car engine valves basically play the same role. They are mechanical devices designed to enable or disable fluid flow. This, in particular, a wise conclusion, hides the fact that car engine valves must leak gas, and the second is that they must be able to operate very quickly. Considering that for a four-stroke engine in one duty cycle (for 4 strokes), each valve is opened once and the crankshaft is rotated twice, it is easy to calculate that each valve at engine speed of e.g. 6500 rpm open and close 3250 times per minute. 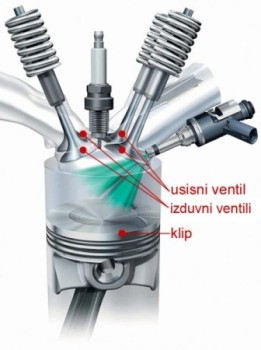 The theory goes that in a four-stroke engine, the mixture of fuel and air is sucked in cylinder the moment the suction stroke begins, that is, when the piston moves from the upper dead point (GMT) to the lower dead point (DMT). Also, we can assume that for perfectly proper engine operation, it is possible to open the suction valve a moment after the piston has moved downwards to create the subpressure to help suction the mixture.

Equally, we could start closing this valve when the piston has gone down 80% of the way down, since afterwards the created sub-pressure (which sucks the mixture) will become almost unusable. But this whole theory falls into the water with the increase in engine speed.

Namely, at higher operating speeds, less time is left for the mixture to be sucked in, so this (theoretical) engine would suddenly run out of power. Adequate to the theory of the intake, we can talk about the exhaust valve. It would be ideal to open it when the piston starts going towards GMT (from the bottom dead center), ie. with the beginning of the exhaust stroke. But again, there is the problem of speed, because at higher engine speeds may soon run out of time to "force" all the exhaust gases out of the cylinder.

Let's say that the mixture of fuel and air (in atmospheric engines) is introduced into the cylinder exclusively by vacuum, which creates a piston in its movement towards the DMT. Exhaust gases are in turn expelled by the pressure created by the piston moving towards GMT. This pressure is much more efficient in starting the gases than the mentioned vacuum (it would be silly to say that the pressure is stronger than the vacuum, right?) And therefore the intake valves are usually larger (larger in diameter) than the exhaust ones. 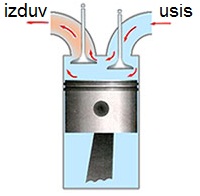 The answer that has (in some ways) solved these problems is called valve overlap. This is to open the suction valve just before the end of the exhaust stroke, while the exhaust valve remains open at the very beginning of the suction stroke. This gives us an overlap, that is, the time during which both valves are partially open. While this may seem a little illogical (or even wrong) now, the idea is that the exhaust creates a certain sub-pressure moving outwards (through the open exhaust valve), and that sub-pressure helps to suck the mixture before the piston starts to go from GMT to DMT .

Taking all that has been said so far, we see that there is a considerable gap between the theory and practice of internal combustion engines, but that is not all. It is quite understandable that all the time we are talking about some "higher speeds" or an increase in engine speed. This means that the engine would have to have the valves (partially) open when spinning quickly (then we apply overlap) at precisely defined time periods, but also in slow operation when the valve operation is more similar to theory. 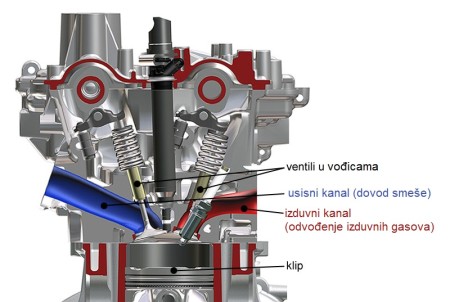 Of course, in practice it is not possible to make an engine that would ideally control the valves in both cases, ie through the entire range of speeds. Therefore, the way out of the problem should be sought in compromise. Most practical solutions end up with high-power engines not performing optimally at lower speeds and vice versa. At some extreme, we can install a distinctly "sporty" camshaft in the engine that will allow the valve to open quickly, but such a motor will be practically unusable up to a higher speed of rotation, regardless of the fact that it turns into a real "beast" above those revolutions.

In addition, at lower speeds, he will probably work so restlessly that no one would want him in their car. One of the, partly, saving solutions is the application of a valve adjustment system, but we will say more about that when we deal with the camshafts and the distribution system.

And when we talk about valves…

As with any topic, there is much more to be said in the story of valves. Whether it is different solutions, ie. valves of a different design and / or mode than those mentioned herein, or to open the subject of valves made of e.g. titanium, there would be no end to the story. Therefore, for the sake of fun, we will say a few more words about just one (somewhat off) themes - sodium filled valves.

Sodium-filled valves were designed sometime in the 1920s as a solution to improve heat dissipation from the combustion chamber and from the engine walls (temperatures inside the combustion chamber can reach more than 1500 ° C, while the exhaust ducts heat above 750 ° C). . The idea is quite simple and consists in such valves having a hollow stem which is filled in some 60% of the volume with pure sodium, which has a high temperature conductivity. When the sodium melts (at 97,5 ° C), by moving the valve it begins to move inside the cavity and thus takes heat from the valve head and dissipates it to the top of the tree.

An additional advantage of such valves is in the slightly lower mass (due to the hollow tree), and the technology is almost as a rule used for the production of exhaust valves, in principle in higher performance engines. Of course, not everything is ideal here either. Sodium-filled valves are brittle under high loads due to the hollow stem, and with the improvement of material technology, their efficiency becomes questionable. Also, by transferring heat to the valve guides, their wear is accelerated. Sodium-filled valves were first used in aircraft engines during World War II. rate.

And, don't forget. Sodium is flammable and reacts in contact with water, quite annoyingly. Therefore, sodium filled valves should not be cut, scraped, drilled and who knows what else to determine what is beautiful inside!

In this video showing the renault's Energy TCe 90 gasoline engine, the valve operation and gas movement are clearly visible: