Turbocharger is one of several systems for additional air intake ie. they compress (reduce the volume) of air entering the engine. The advantage of reducing the volume of air entering the engine through the intake manifold is that it allows the engine to have more air in the cylinder, and thus more fuel is needed to make the appropriate mixture. As a result, more power is obtained from each explosion within each engine cylinder. By definition, a turbocharged engine produces more power than a non-turbocharged engine, and this greatly improves the power / weight ratio of the engine. 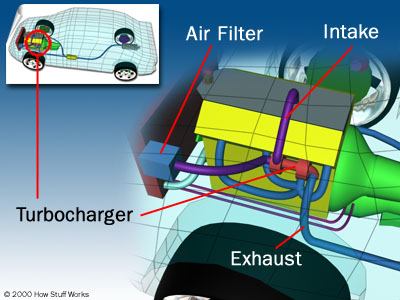 Turbochargers allow the engine to burn more fuel and air by injecting more fuel and air into the existing engine volume by compaction. The measure of compaction is in bars (metric system) or psi (colonial system - pounds per square inch).
1bar = 14,503 psi ie. 1psi = 0.068947 bar.

The typical turbine pressure is usually around 6 - 8 psi. about 0,5 bar, which means that 50% more air is injected into the engine (1 bar is normal pressure, and when you add 0,5 bar of pressure using a turbine, you get 1,5 bar, ie 50% increase in pressure). It is to be expected that the power will jump by 50%, but the system is not 100% efficient, so the power increases are in the range of 30 - 40% depending on the construction. Part of the inefficiency stems from the fact that the air that drives the turbine is not "free", ie. the air that the turbine borrows from the exhaust branch of the engine has its price. The price is that the engine has to invest more energy to expel the air, since there is a resistance to turning the turbine at the outlet, which that exhaust gas must overcome.

Turbochargers help at high altitudes where the air is further diluted. Normal engines will have less power available in such diluted air because less air will be in the cylinder, while with a turbocharged engine this difference will be far reduced (there is still a decrease in power, only smaller) because the turbine, although the air will less often to push far more of that rarer air because it is lighter and thus will slightly offset the loss of air density.

Older cars with a carburetor automatically increase the flow of fuel to steam the higher air intake into the engine, while modern cars with electronic fuel injection do the same, but this increase in fuel flow will be commensurate with the data the air flowmeter measures, as its name tells how much the air has entered the engine so the air to fuel ratio of such engines will always be very close to ideal. If the turbine is high-pressure and electronic injection does not have a sufficiently strong pump that can supply the required amount of fuel to the cylinders, or the software that manages the fuel injection will not allow so much fuel or the injectors to enter the cylinder have insufficient flow capacity the engine will not be able to make the most of the turbocharger, so other parts of the fuel injection system will need to be further modified to harness the full potential of the turbocharger.

How the turbocharger works:

The turbocharger is attached to the engine exhaust, and these exhausts turn the turbine. The turbine is axially connected to a compressor located between the air filter and the engine inlet, and that compressor compresses the air that is injected into the cylinders. Exhaust from the cylinders passes through the turbine blades that rotate the turbine itself and the more air passes through the blades, the faster the turbine rotates. On the other side of the shaft to which the turbine is attached is a compressor that pumps air into the cylinders. The compressor is so called. Centrifugal Pump - draws air in the center of its blades and pushes it further as it rotates. To withstand 150000 revolutions per minute, the turbine shaft must be attached very carefully. Most of the bearings would probably explode at this speed, so the turbochargers use fluid (oil) that is in a very thin layer between the bearing and the shaft, which helps the ball joints along which the shaft moves thereby reduce friction while cooling the shaft and other parts. turbocharger.

Figure 4. Turbocharger layout
On the left is an air compressor and on the right is a turbine that uses exhaust gases
starts the compressor by means of the shaft connecting them. 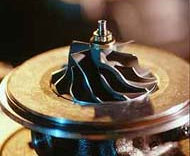