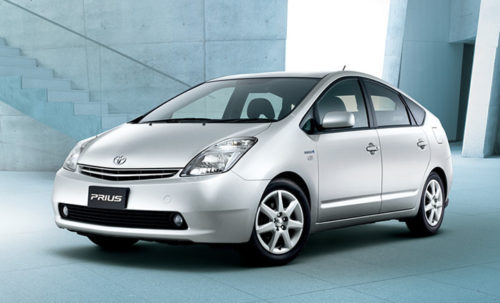 Toyota Prius is the second generation of a hybrid car with electro-gasoline propulsion produced from 2003 to 2009.
The shape of the Toyota Prius body is unusual and adapted to the basic concept of the vehicle, and most of the work was done to keep the coefficient of air resistance as low as possible. That is why the roof is domed, and the rear part of the car is quite high. All together it looks pretty sophisticated.
The lower part of the Toyota Prius is completely closed to reduce air vortex and thus fuel consumption at higher speeds.
The total coefficient of air resistance is only 0.26, which is one of the best results ever achieved with cars in series production.

The interior of the Toyota Prius is futuristically designed.
The instrument panel has a touch screen around which are the controls of all systems in the car. On the left side there is a button that allows direct access to the commands of the air conditioner and audio system, and on the right there is a button to control the display functions.
A large number of controls are also located on the steering wheel of the relatively small hoop next to which the gear lever is located.
In front of the driver there is another display where you can read all the necessary information such as speed, mileage, transmission mode, etc.
The seats are comfortable and upholstered in high quality fabric, with no side rests.
The batteries are located just behind the back seat, which affects the shape of the luggage compartment, which is made in two levels with a volume of 410 liters.

The drivetrain of the Toyota Prius is therefore, hybrid, a combination of petrol and electric motor. The petrol engine is a 1.5 DOHC 16V with 77 hp. It has a chain for driving camshafts, so no interventions are planned for the entire century. The electric motor is synchronous, with permanent magnets and works at 500 V.
Maximum power is 68 HP.

The city of Toyota Prius mainly uses electric drive, and gasoline only turns on when the accelerator pedal is pushed to its limit, or if necessary to recharge the batteries.
While running a gasoline engine, the city has an average consumption of 5.7 liters.

On the open road, the Toyota Prius mainly uses a gasoline engine, with a fuel consumption of around 6 liters.

Objectively, the Toyota Prius has good performance, but the subjective impressions of the driver are not that thrilling.
Departure from the place seems sluggish, and the acceleration seems weaker than it really is.
Even if you try to drive with electric drive only, you will succeed only if you are extremely careful to depress the accelerator pedal.
Everyday city driving definitely involves constantly cranking up a gasoline engine to help.
Its behavior on winding roads is not nearly as good as on the Avensis, and they have the same front trap.
Even the rear axle, taken from the Corolla, is not overly secure on such roads.

Previous: How Much Engine Oil Does a Chrysler Grand Voyager Go to?
Next: How Much Motor Oil Goes to a Chevrolet Spark (2010 - 2014)?