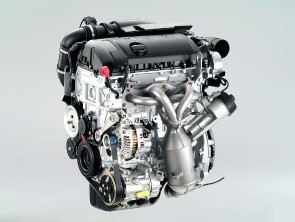 2002 announced the collaboration of PSA Group and Bmw. The plans focused on creating a new family of small, four-cylinder cars that would have tangible benefits for both corporations. The 1.6 VTi / THP hit the market in late 2006. Initially, it was fitted to the Mini One (and Cooper) i Peugeot 207 , and was later incorporated into most PSA Group models. 1.6 VTi engines have four valves per cylinder and are equipped with the Vanos system (valve timing change control). The THP engine also gets direct fuel injection and a Twin-Scroll turbocharger with (through two channels in the turbine exhaust), maintains the pressure in the intake section, so it is possible to get high torque from the "bottom" and avoid the turbo hole.
The 1.6 VTi engine only comes in 120 hp variants, while the 1.6 THP engines come in 150, 156, 163, 175 and 200 hp. With the second-generation debut Peugeot The 308 introduced a new 125hp engine variant, and in 2014, a 270hp version also appears (originally in the sporty RCZ R, but PSA is likely to adapt this device to other models as well). These N43 engines can also be found in the Bmw Series 1 and 3 (101, 136 or 170 hp). The advantages of VTi / THP include, above all, good dynamics and low fuel consumption.

From the very beginning, users have complained about the loud operation of the cold 1.6 THP engine ("rattle" as with diesel), the problem occurs after 40 km. The problem disappears after the engine warms up. It turned out that the drive chain spanner was faulty, which could lead to towing of the chain, and if it does not react quickly, the malfunction could lead to expensive repairs. PSA and Bmw carried out an action to replace defective parts during the warranty period. At the transition between 000 and 2008, more permanent spanners were introduced.

THP engines have problems with the turbocharger, manifested by a reduction in power, smoke from the exhaust, a loud whistle sound when accelerating. Low mileage may result in damage to the rotor, and there may be cases of the turbine housing cracking.

1.6 THP may suddenly be powerless. In this case, there may be several reasons: a problem with the software that controls the operation of the drive unit due to a timing shift, a loose chain. Sometimes, the engine may go into safe mode because the control unit displays an error message in the exhaust gas cleaning system.

Check the oil level regularly - some engines can consume a liter of oil at 2500 km.

Damage to the 1.6 THP Camshaft, Rough Engine Operation, Engine Fault Light. A car that has been driven for too long with too little oil level causes the camshaft and bearings to wear quickly.

We recommend users to check the oil level regularly. The good news is that engine parts have been modified since 2011 to solve a number of engine problems. But again, there are some owners of vehicles with this engine who have complained about the engine… On the other hand, you can meet many owners who have never experienced any of the above problems.

The 1.6 liter engine, jointly developed by Bmw and PSA, has proven to be a lot of bugs and over time most of the failures have been eliminated and engines manufactured since 2010 are more durable.