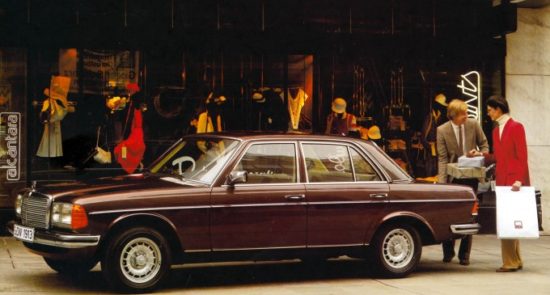 Legendary " Mercedes W123 "is by far the best-selling model of the Sturgart brand. He is considered a pioneer in several areas: he had the first station wagon version in the history of the brand, the first turbo diesel engine in Germany, and there was another model with an optional airbag.

Improving safety, improved comfort and easier service: these were the key tasks Mercedes set for its engineers back in 1968. 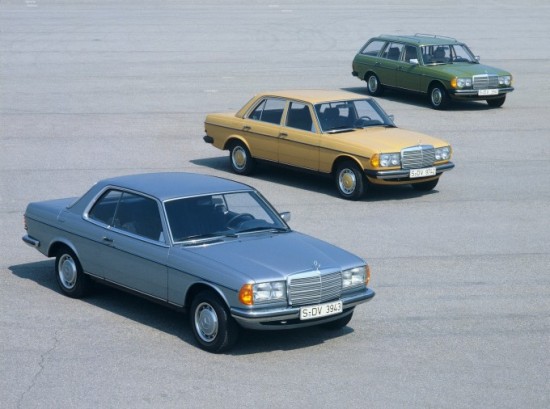 At the time, the premiere had the 'W 115/114' series, which marked the beginning of work on the next model, which will bear the Mercedes W123 factory designation. It took the constructors seven years to get the car its final look.

In the meantime, many ideas have been put on the table, from the most radical ones with futuristic elements to the most classic ones. By 1973, much was already known. The first prototypes were made in 1974 and were also used for crushing tests through which the programmed deformation zones on the body were examined. 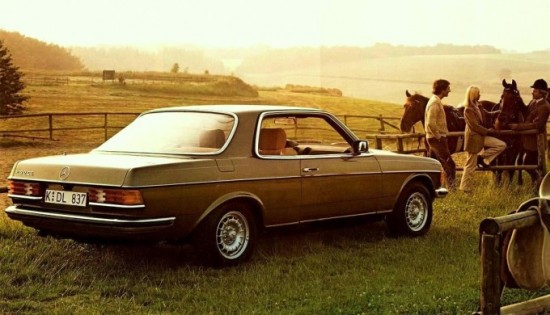 Since Germany introduced the obligation to fasten seat belts on January 1, 1976, Mercedes immediately began work on the construction of airbags, which were installed on the Mercedes W123 only in 1982 as an option.

Interestingly, the slogan related to the start of batch production was "preparation for perfection". A so-called "pilot" assembly tape was put in place for the "twenty-three people" who used to train and train employees. 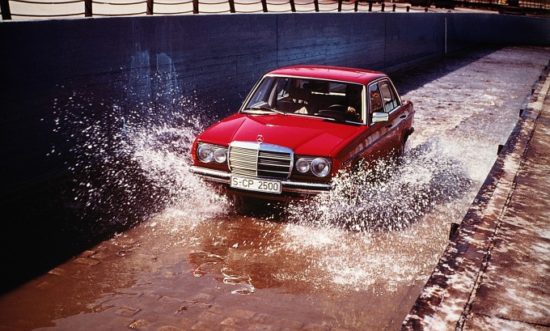 The first 16 copies were assembled in the summer of 1975. All these preparations paid off, as the new model was warmly welcomed by the public, and all of its annual production for 1976 was pre-sold.

The waiting list was so long that some cars waited for three years, and one-year old used to reach the market for up to five thousand marks higher than the price of new ones. 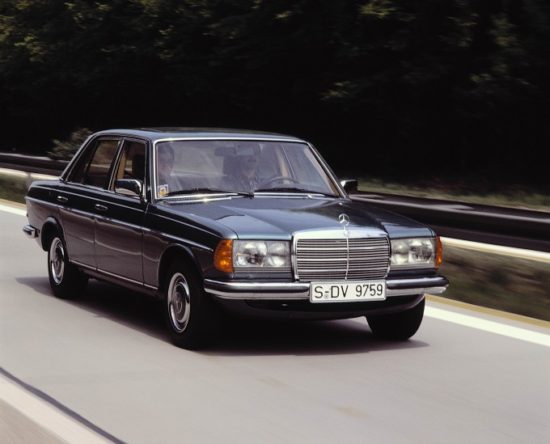 Initially, the rectangular headlamps had only the strongest 280 and 280E versions

Because of all this, Mercedes has continued to produce the "shocks" (in German Strich-Acht, or "/ 8") models in parallel with the new ones. It was most sought after by taxi drivers and many other important middle-class buyers who did not want to wait for a new car. 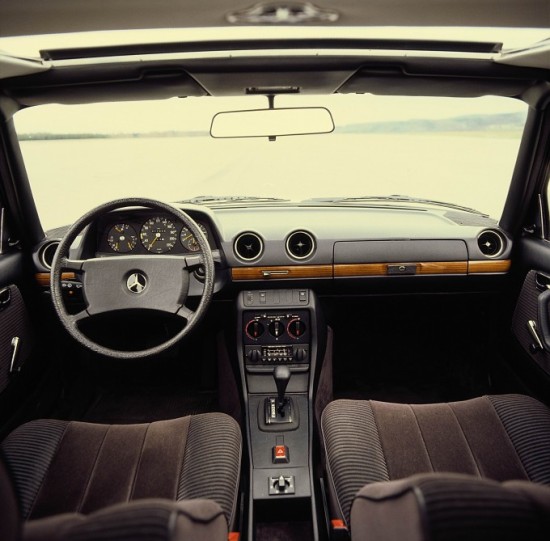 Immediately after its appearance, the Mercedes W123 was more than recognizable, thanks to the stylistic similarities with the then current "S class" and "SL", and above all horizontally oriented headlights instead of the previous vertical ones.

Headlights immediately became a hallmark of cheaper and more expensive versions. Namely, the round elements inside the rectangular headlamp were reserved with all models except the top versions "280" and "280 E". They were characterized by square elements until 1982, when all versions got the appearance of more expensive models. 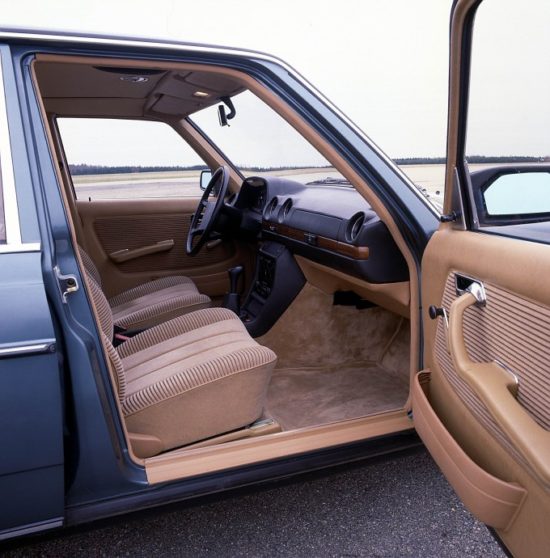 The quality of the materials and workmanship is also evident in the picture, which is four decades old

The front suspension is borrowed from the "S class", including double triangular shoulders. There were a total of nine engines in the first year of production. The weakest gasoline "200" had 94 hp, which it achieved at only 4.800 rpm, while the "200 D" had 55 "horses". 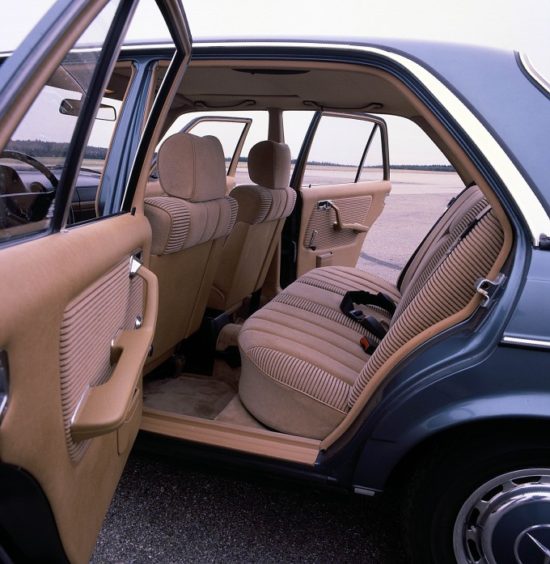 A couch, not a seat 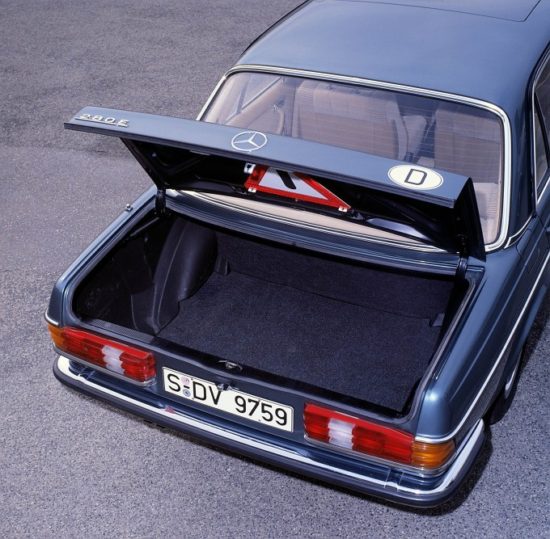 The trunk is pretty shallow

Since then, all diesel engineers have turned on the ignition key, as well as gasoline, and not with the help of a "bypass" used to activate the heater and "shut down" the engine.

Enthusiasm for the "twenty-three" has not waned in 1977 either. This was the year that introduced three other body variants - the coupe, the limo extended and, for the first time in the history of the brand, the station wagon.

Unlike the previous generation, where the coupe was very similar to a sedan, there were a lot of differences here. For starters, the wheelbase was 85mm shorter. The roof was lower and the windshield sloping, giving it a more sporty look.

Compared to the four-door sedan, the coupe had a tougher body, thanks to reinforcements in the roof as well as in the door. The suspension and brakes were the same as on the sedan. At the outset, the coupes featured the most expensive sedans - the headlights had square interior elements, and chrome trims under the taillights. 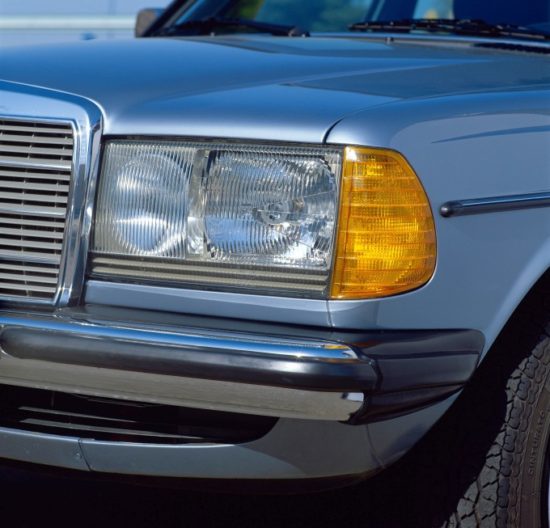 After the distillation, all versions had rectangular headlamps

The redesign that followed in 1982 had the most effect on sedans and was barely recognizable on the coupe. The biggest difference is that the redesigned coupes had black ventilation system intakes just below the windshield. 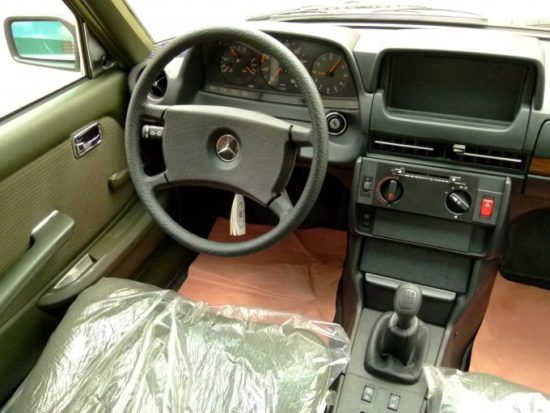 The serial production of the coupe lasted until August 1985. A total of 99.884 units were produced, of which 15.509 diesel engines ("300 CDs" and "300 CD turbodiesel") for the US market. There were also very long waiting lists for coupes, so some customers waited more than two years for their car.

In August 1977, another unusual version was introduced - with a long wheelbase extended by 63 cm. This provided ample room to seat the third row of seats, making the car even more popular as a taxi or a seven-passenger official sedan. 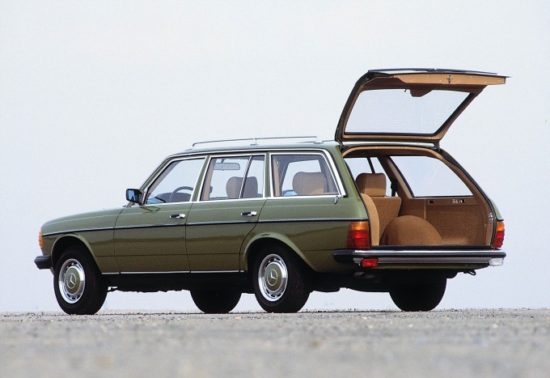 Despite its impressive proportions and powerful engines, the extended "twenty-three" generally served not as a representative vehicle, but as a sophisticated car that can carry a larger group of people. It was mostly used by hotels and taxi drivers.

At that time, the caravan was a combination of a passenger car and a van. Although many well-known repair shops created station wagon versions of several Mercedes models, the Mercedes W123 was the first production car from Sindelfingen to have such a body shape. 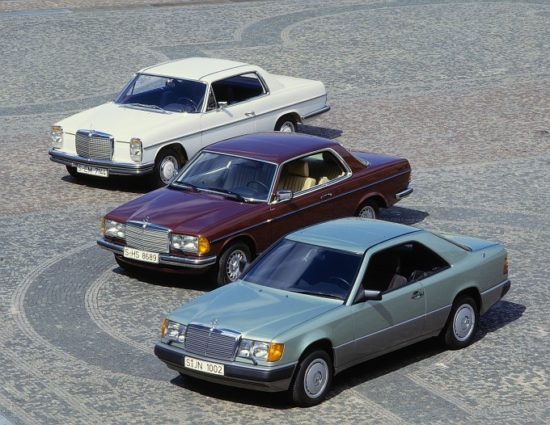 Admittedly, only a hundred specimens were produced in Sindelfingen, and during that time workers from the factory in Bremen were trained, where production continued.

Although it was the first production Mercedes-Benz station wagon, this body shape was not entirely new to designers. Several bodybuilders were already revamping the predecessors of the "twenty-three" and Mercedes engineers were aware of it.

Restraint towards the caravan was the cause of a hitherto renowned vehicle of this kind that was not considered to be a good fit for this brand. On the other hand, according to market research, there was a need for a sporty, luxurious and slightly different five-door model.

Thus, the Mercedes W123 station wagon became a family and leisure car. At the beginning, there was a lot of controversy about the name of the new model, but in the end, everyone agreed that it should bear the sign "T", which would be associated with tourism or transport.

The official start of production was in April 1978. Technically, the car was a complete repackaged sedan, with identical mechanics but also in all dimensions. The difference was in the volume of the luggage compartment, which to the lower edge of the window was 523 liters, and in the case of collapsed backrests, it increased to 879 liters.

For an extra charge, the backrest was asymmetrical, split into one or two thirds. Unlike the competition, the wagon had a fully lined boot with the same materials as the passenger compartment.
Hydropneumatic suspension was self-adjusting, so that a ton and a half heavy car could carry up to 45 percent of its weight without being visible from the outside. This is also the latest version of the "Twenty-Three" that remained in production until January 1986. The others were phased out during 1985 as a successor - the "W 1984 Series" - emerged in late 124.

More Popular than Golf
How popular the "one hundred and twenty-three" was is also shown by the fact that it surpassed the "VW bug" and even the "golf" at one point in terms of sales in Germany. Specifically, in 1980, 202.252 Mercedes W123s and 200.892 Golfs were sold.

What are the most popular models?
During the ten years of production, the most successful models were those other than diesel engineers. The "240 D" is the best-selling model with a total of 448.986 sedans, 38.903 caravans, 3.841 extended versions and 1.952 chassis to upgrade. 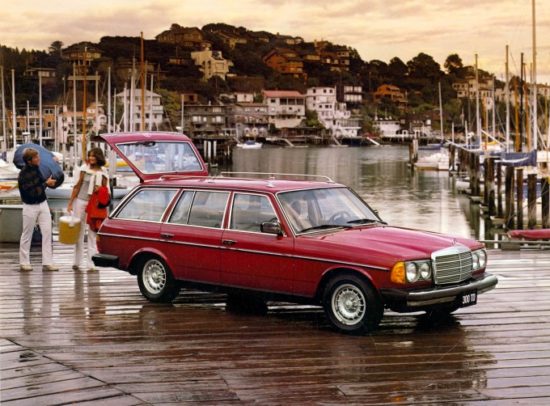 In October 1980, Mercedes was the first in Germany to introduce a turbo-diesel passenger car. It was a model of "300 TD turbodiesel" with 92 kW (125 hp), factory designation "OM 617". Sedans and coupes with this kind of engine were mostly exported to the United States and with a base price of 37.200 marks were the most expensive serial "Mercedes" of the series "W 123". The "280 CE" coupe alone cost a hundred marks more. 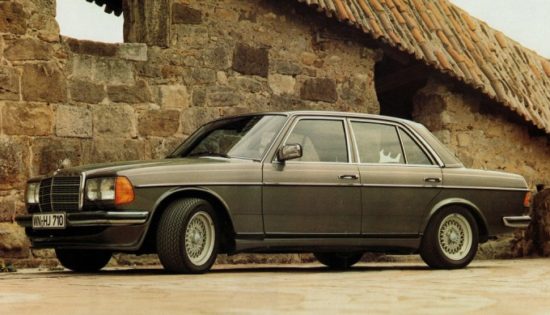 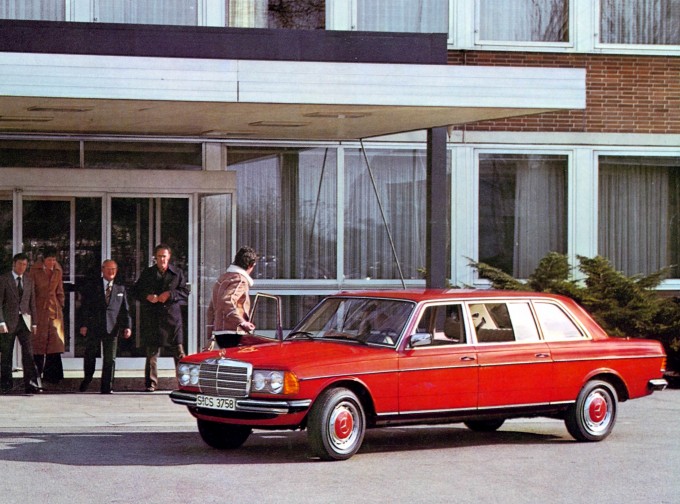 Such alterations were mainly done by Binc and Meissen, although others did not hesitate to make their own versions and even convertibles. Of course, the tuners already had a "peak" at the "W 123" by then, with AMG, Brabus, Lorinser and Zender leading the way. 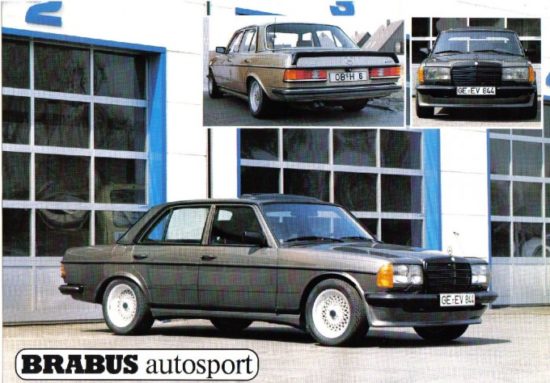 This model was also good "guinea pig". The factory began serious research into alternative fuels on the "W 123". The "280 TE" was used as a test vehicle powered by hydrogen, but also as an electro-mobil. A variant of the "200" model, powered by liquid petroleum gas, arrived in 1982 from the laboratory and into mass production. 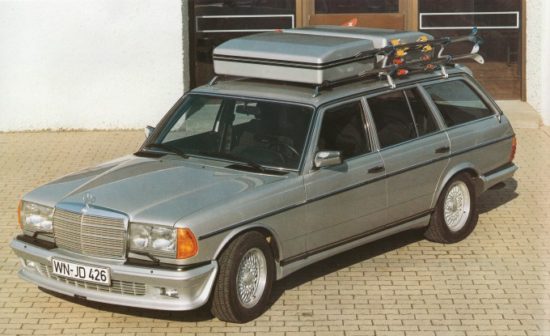 Easily double the price
The list of accessories was so long that it could be printed as a book. The options meant everything that today's luxury models have. Admittedly, automatic "climate" was built into models for the US market. 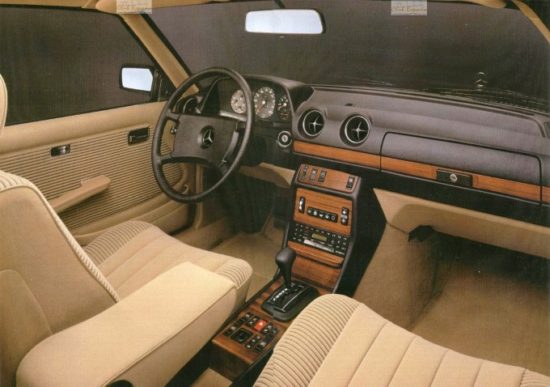 With the optional Becker phone, the price went up by an additional 20.000 marks, so the caravan with all these options cost three times more than the base "S class". There were so many extras that the value of the optional equipment easily doubled the price of the car. 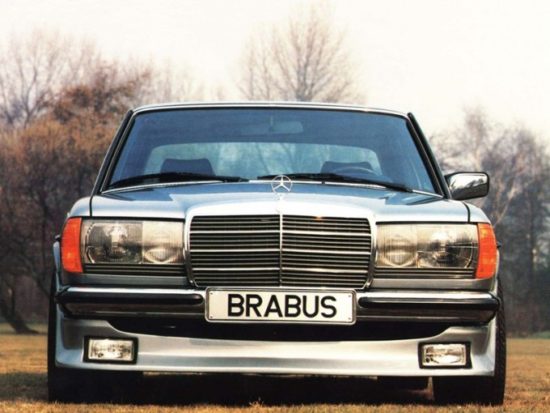