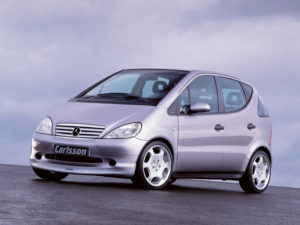 Towards the end of the last century, Mercedes decided to finally engage in a fight with the "people's" car, its "majesty", VW Golf. The venture was a major novelty for Mercedes engineers. It took a radical change in the philosophy of designing a car, and made a practical, cheap enough and appealing car that could compete with the best-selling mid-range models, not a luxury sedan. Also, for the first time in its history, Mercedes has introduced a model with front-wheel drive, and aggregates with a smaller working volume of 1.8 liters.

If it was once the case that the presented car defines the sector then it was in the case of the Mercedes A Class. We have a supermini car here that is shorter than Fora Ka but offers more space, impressive build quality and a super-famous brand.

Significant criticism followed very quickly. The most significant, and at the same time the most painful, is the fiasco with the reindeer test. Scandinavian journalists were able to publish the truth - Mercedes A class overturned! The cause is a poorly designed rear axle. Thanks to loyal German customers, Mercedes stoically endured the big "slap" (after the cessation of production of the Mercedes A from October 1997 to February 1998), and very quickly completed the problematic suspension, but also included it in the standard equipment. stability control electronics - ESP.

Sales were only accelerated by the introduction of modern common-rail diesel engines: the Mercedes A 160 CDI (with 60 hp too weak) and the Mercedes A 170 CDI, and then new equipment packages along with more basic seats and higher quality materials introduced in March 1999. , when the Mercedes A Class finally becomes a worthy competitor to the Golf IV.

Unlike the not-so-perfect support, the trick with the so-called "sandwich floor" overshadowed the competition with a luxurious offer of space in the car (it can also boast a 390-liter trunk) that is only 8,5 centimeters longer than our South. There is enough space in the back seat for the knees and heads of more corpulent passengers, and at the beginning of 2001, along with a thorough restyling, an extended version (17 centimeters longer) was presented, which offers more space for passengers than the much more expensive C-Class!

Thanks to the above-mentioned double floor Mercedes A, on the prestigious Euro NCAP crash test, "Baby-benz" won the then "big" four stars 7 years ago and a total of 27 points, which is quite a good result by today's standards.

Despite the fact that there are better cars in the compact class (Golf IV, Astra II), Mercedes A class is in the first place a Mercedes, which became in the full sense of the word after a thorough "wrinkle tightening" in 2001. Although not as stable in sharp curves as the Golf IV, it is sufficiently manageable and predictable, and in that it is also helped by top brakes that stop this car at a speed of 100 km / h for 39,0 meters, which is significantly better than Golf IV i Astra II.

The interior of the "little one" with a star on the nose is practical, likable and modernly designed so that even younger customers who could only dream of buying a Mercedes A class before. The instrument panel is primarily clear with a predominantly large speedometer (which is also visible from the "plane") and a much less clear tachometer. It is irritating the lack of some basic indicators, such as the temperature of the antifreeze, instead a small lamp is installed, which only starts when the engine is close to "heat stroke", ie overheating (which is too late). Bad and embarrassing.

Some did not like the quality of the hard plastic, which really has nothing to do with what we are used to seeing in Mercedes sedans, and the relatively small and gentle ventilation openings do not delight either. However, the finish is good, and no sound is heard from the plastic even after 100 km. The front seats deserve praise as well as the steering wheel position, which is almost ideal for a car of this price range.

The Mercedes A class, however, has partly deviated from its policy of producing quality cars for lower prices.

The quality of the material is evident when compared to other Mercedes A class cars, it contains all the features expected from European manufacturers. They are also very much taken with the safety of the cabin design and its obvious safety aspects. The list of equipment is very impressive with traction control, stability control, several airbags, electric windows, efficient heating / air conditioning, good sound system and an excellent five-speed automatic transmission.

The "sandwich" construction of the Mercedes floor allows it to significantly increase the level of safety. Passengers are well protected in a side impact (most can take a solid wide sills and lower, not relatively narrow doors). In a frontal collision, the entire drivetrain (engine, transmission and clutch) slips on the floor, without causing damage to passengers. This is important because in the kneading zone forward the Mercedes A is short.

Corrosion protection is also quite good but not ideal. 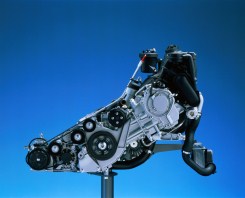 The Mercedes A range of 1.4 and 1.6 liter, 82 and 102 bhp petrol engines is quickly complemented by the 1.9 liter and 125 bhp engine. However, the best choice is a turbo diesel with direct fuel injection into the cylinders - a 1.7 liter CDI, 90 hp and a maximum torque of 180 Nm at just 1 600 rpm. Such an engine is more than adequate for a car that excels in the city thanks to its compact dimensions and small turning diameter. The recommended unit consumes on average about 6,0 liters of Euro diesel, while the most economical lead-free (1.4) meets only 8,0 liters of unleaded petrol every 100 kilometers.

Consider buying a Mercedes A Class:
- Many Mercedes A-Class, due to their large interior space, have been used for small businesses, so check the quality of the rear seats.
- Most of the cars that come from imports are from Rent-a-Car, they are mostly well serviced, but if you can bypass them.
- Accessories are key for Mercedes. Avoid cars with poor equipment because they will be harder to sell. Leather and automatic transmission are preferred, while air conditioning is mandatory.
- Mechanical problems are rare. We give a plus for cars with a service book.

Rigorous technical inspections have found that Mercedes A engines and transmissions can withstand high mileage without signs of significant wear, and even the exhaust can not be replaced for many years, which is a rarity for most cars today. The brakes after 2001 deserve all the praise, as well as the steering.

Mercedes A 170 CDI. Models designed by August 1999 had a lot of problems with the injectors, the problem occurred after traveling from 20000 to 30000 km. All four injectors need to be replaced, the replacement is done under warranty.

Mercedes A 170 CDI. On some models manufactured until August 1999, the engine has excessive oil consumption because the car consumes 1000 liters of oil per 0,8 km.

The belts were a problem on the engine on models manufactured until April 2001, especially the CDI versions. the problem caused by the tensioner. It manifests itself in noise. There is a risk of belt wear and tear.

For diesel, the problem may be a loose accessory drive belt, the alternator pulley needs to be replaced, most likely.

Manual transmission. On a Mercedes A manufactured until July 1999, difficult to get into first gear, especially when it's cold.

Clutch. Some Mercedes A-Class models made up to 2001 had problems with premature wear of the clutch set.

Over time, it has been shown that the rear suspension also has problematic bearings with poor sealing, into which water easily penetrates, and the negative consequence of all this is too fast washing of lubricants from conical rollers, which of course causes corrosion and then "rot".

Back light. For a Mercedes A manufactured until 2002, a breakdown on the switch causes the tail lights to not work.

Fuel gauge. For the Mercedes A produced up to May 1998, there was an error on the fuel gauge, which in most cases showed more fuel than it actually had in the tank.

A clock. For models manufactured until May 1998, it was impossible to reset the clock on the instrument panel.

Power windows. For models manufactured until December 2001, there were problems with the window lifting and lowering.

Rust. Around the rear wheel arches and underneath the Mercedes A door are sensitive spots on the rust.

Plastics. The plastic parts on the car could start to peel off, which gives it a bad look.

Buyers in Western Europe are "crazy" about Mercedes A-Class, which is not yet the case here. When buying, take the least Elegance models, as they have proven to be the best. Diesel engines keep the value of the car long.

Customers like the level of equipment that the Mercedes A Class offers in the basic package and the "sandwich structure" of the vehicle, which provides passengers with a collision by crashing the engine below the passengers. The driver's seat is high and makes parking easier.

Buying a Mercedes A Class is certainly not a bad purchase. We recommend the A170 CDI because Mercedes diesels are the most economical and reliable. None of the gasoline is a fully sports car.

Excellent ergonomics Mercedes A class, and after the restyling, excellent quality are the trump cards that attract all those drivers who buy a car in the long run. A 1.6-liter petrol engine with 102 hp can be a "golden mean" if you don't drive many kilometers a year and want good performance. In any case, with the first generation of the A-Class, Mercedes has shown serious intentions to get involved in the race for the Golf, and today the new Mercedes A-Class confirms that every day.