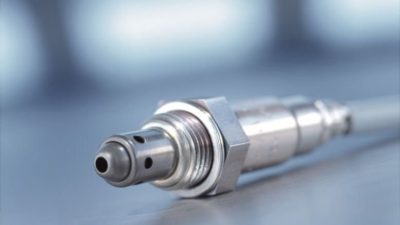 No modern internal combustion engine with all the power of its electronics would be worth almost a grain of grain without the electrical signals obtained from a tiny electro-mechanical element housed in the exhaust pipe of a car. Be sure to guess what element it is, it's a lambda probe…

The lambda probe is tasked to send a certain voltage signal electronic control unit (ECU) which recognizes the current composition of the air-fuel mixture. In order for the lambda probe to function properly, it must be preheated with the energy obtained from the current of hot, burnt gases to a certain temperature necessary for its proper functioning in the complete operating range of the engine. 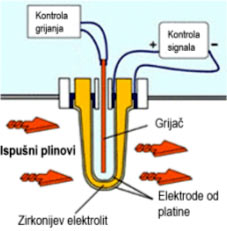 The lambda probe is placed in the exhaust stream and is designed so that the outer electrode is surrounded by the exhaust gas and the inner electrode is accessible to atmospheric air. The base of the lambda probe consists of a special ceramic element, the surface of which is coated with a porous platinum electrode. The probe operation is based on the fact that the ceramic material is porous and allows the diffusion (penetration) of oxygen present in the air. At higher temperatures it becomes conductive and if the oxygen concentration on one side is different from the oxygen concentration on the other then it creates stress between the electrodes. In the area of ​​stoichiometric mixture of air and fuel (l = 1,00), there is a jump in the encoder output voltage curve. This voltage is a measuring signal. 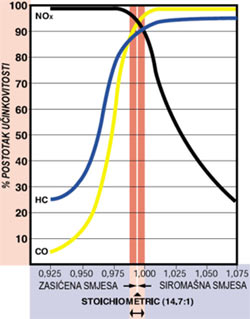 In addition to the mechanical protection provided, the effective change of the temperature of the lambda probe during the transition from one working form to another has been successfully reduced.

The output voltage of the λ encoder, as well as its internal resistance, depends on the temperature. Reliable operation of the lambda probe is only possible at exhaust temperatures above 350 degrees Celsius (unheated version) and above 200 Celsius (heated version).

Lambda control with a closed loop represents, in fact, the existence of feedback from the lambda probe to the engine, ie to the control unit, and with its help the air-fuel ratio can be very precisely maintained at λ = 1,00. By using a closed-loop control assembly formed by means of said lambda probe, deviations from the specified air-fuel ratio can be established and corrected. This control principle is based on by measuring the oxygen content of the lambda probe in the exhaust.

Oxygen in the exhaust is a measure of the composition of the mixture of air and fuel that prima engine. The lambda probe works by sending information (electrical impulses) whether the mixture is richer or poorer than λ = 1,00. In case of deviation from this value, the voltage of the encoder output signal changes abruptly. This change is handled in a central computer unit (ECU) equipped with a closed loop control for this purpose.

Fuel injection into the engine is controlled by the injection control system, and according to the information of the lambda probe on the composition of the air-fuel mixture. This control is such that an air-fuel ratio of λ = 1 is achieved. The voltage of the lambda probe is actually a measure of correcting the amount of fuel in the mixture of air and fuel entering the cylinder.

Before giving a reliable signal, the lambda probe must reach a temperature above 350 degrees. Until that temperature is reached, the closed-loop control is suspended, and the mixture of fuel and air is formed at the middle level by the open-loop control, ie without feedback. One question logically arises here, is the value of the lambda coefficient, after reaching the operating temperature, in the entire operating mode of the engine always equal to one? Of course it is not. Depending on the current wishes and needs of the driver, this value can range from 0,8 to 1,2. If, for example, sudden and sharp acceleration is required, the central computer unit switches the fuel injection to the open loop mode and injects as much fuel as needed to achieve the desired engine operation (λ <1). The same applies in cases where engine braking is required, which is characteristic of long descents, the engine will then be injected with less fuel than usual for a certain number of revolutions (λ> 1).

Although the lambda probe operates with very high precision of ± 1%, the tolerances and aging of the motor have no effect on the closed-loop lambda control.

Who invented and which car first used the lambda probe

The oxygen sensor was invented in 1975 by Robert Bosch engineers, in response to U.S. environmental requirements for controlling car emissions. Initially, lambda probes were only installed on gasoline vehicles with injection systems.

The first generation of the lambda probe has withstood 20.000 kilometers. And the first car in which the probe was installed in 1977 was the Volvo Model 244.

The second generation of the lambda probe appeared in 1982. These sensors have already withstood higher temperatures and longer life.

It depends on the ceramic tip material, the presence of the heating probe, and other factors. On average, a modern lambda probe has a life span of about 60 to 000 km, but experts advise that they should be checked every 80 km.

Defective lambda probe - causes and how to understand

The Lambda probe is one of the most sensitive sensors in the car.

How to understand that the lambda probe is faulty:

However, these are pretty vague symptoms because the check engíne indicator lights up when there are many different failures in the computer, including poor quality fuel. Only the on-site diagnostics can give the correct answer, which should not be delayed. The fact is that a faulty lambda probe can significantly reduce the catalyst resource and disable other components and parts. As a result, repairs will be more expensive.