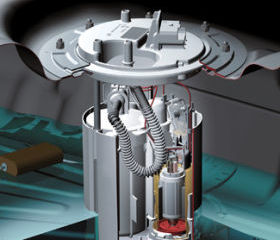 A fuel pump is a pump, as its name implies, that injects fuel into the car system, that is, it ensures that there is always enough fuel. There are fuel pumps outside the tank and those that are submerged in the tank, and today's, newer cars still usually have exactly the same fuel pump that is submerged in the tank.
For fuel pumps, it is important not to drive too much in reserve, because such driving greatly damages the pump itself, ie reduces its service life. It is interesting that in those vehicles where the pump is placed in the fuel tank, only the fuel actually has the role of cooling the pump! It is for this reason that it is not good to drive long and often on fuel reserves. Also, evaporation is created in the half-empty tank, which in turn creates corrosion, which is another reason for faster pump failure.
Until the early XNUMXs, the fuel pump was housed in the engine and operated on a membrane and mechanically driven basis. In those years, a fuel injection system began to be introduced into vehicles, and at the same time much more pressure was needed to bring fuel to the system all the time. These old mechanical pumps were able to muster only fifty percent of the required pressure, so electric fuel pumps were introduced, which pumped up to ten times the pressure. Electric pumps are now controlled by computers, which are much more convenient, but even when a problem occurs, it is much more expensive and complicated.
In order for the internal combustion engine in our vehicles to function, the fuel injection system must be constantly supplied. This is the task performed by the fuel pump in combination with the fuel filter and the tank. The pump actually supplies the nozzle with a certain amount of pressure, but also with the amount of fuel. When we turn the key, the computer turns on the pump for a few seconds and begins the whole process. The computer only allows pumps to run while the engine is running. This is a security item.
It is very important to change the fuel filter regularly as it directly protects the pump. We already know that our fuel is not of the best quality, so various impurities are retained in the filter. The pump sends fuel through the filter, and when there is a lot of impurity in the filter, the pump is very tormented and will be damaged after a while.
The most common sign that a pump is wrong is when the car cannot start at all. However, it often happens that the pump has not completely failed but is injecting a certain amount of fuel that is not sufficient. In some cases, the pump itself will warn that something is wrong. If the fuel is low and it overheats, the engine will shut down after about twenty minutes. Once the pump has cooled down for about half an hour, the engine will be able to start again.
Most often, gasoline engines have a fuel pump, while diesel vehicles have so-called. you will pump a vacuum that draws a certain amount of diesel to run the engine.
Either way, if you have to change the entire fuel pump, it's a big expense. Repair is much cheaper than replacing the entire pump. Also, if you have to replace the pump, it is best to buy a new one and give it to authorized persons to install it. Due to the lack of money, people often install the pumps themselves or replace the old one with another old, used one, where the problem can be further increased.

Previous: It's all about the Boxer engine
Next: Renault Clio 2005 - 2014 - Used, experience, engines, failures