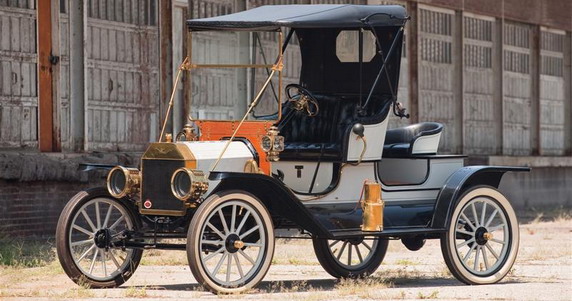 On May 26, 1927, Henry Ford attended the production of the 15 millionth and last Ford Model T at the famous Highland Park plant, Michigan. Although everyone was expecting a big celebration of what a legendary car like the Model T deserves, Henry did not want any ceremony and failed to hide his tears.
Mostly because he knew he was coming to a car that set the world on wheels and could no longer sustain itself in life. Henry, like his son Edsel, who at the time was the president of the largest auto company in the world, Ford, got behind the wheel of the car and drove it to Dearborn Engineering Laboratory, some 20 km away. At that location, the last Model T was parked next to two other important cars in history Ford - the first car Henry produced in 1896 as well as a 1908 Model T prototype. The richest man in America drove all three cars that day and reminded many of how long the journey was to the American dream. Henry Ford did not invent the car or conveyor belt, but perfected them to such an extent that his name must be at the top of the list of people who had the greatest influence on civilization. By modifying the treadmill, Henry was able to make the car cheap and overnight the car from luxury to need.
Henry Ford was born in 1863 in Dearborn, Michigan, as a son of a farmer originally from Ireland. From an early age, young Henry indicated that he was ready for big work when he modified a field machine, and at the age of 13 designed and built the first coal-fired machine. Three years later, Henry leaves the farm and moves to the city in search of a better life and gets a job maintaining steam engines for locomotives, and at 24, he marries Clara Bryant, who will be a big support in the future in his quest for the top. The world changed greatly when Karl Benz introduced the first gasoline vehicle in January 1886, and seven years later Charles and Frank Duryea introduced the first gasoline car in America. Henry was very interested in this idea and although he continued his work on steam engines, in his spare time he started working on a similar gasoline engine. The first such engine Henry tested successfully on Christmas Day 1893 at his family home. Shortly afterwards, Henry began working on the rest of the vehicle, which was ready three years later, and the idea was presented to the main people at the Edison Illuminating Company, the company where Henry worked. However, the company was not interested in gasoline cars and believed the future was in electric cars. In 1899, Henry becomes president of the Detroit Automobile Company with the goal of producing cars, but soon goes bankrupt before she can produce any cars. There are several reasons, and the biggest lies in the feud between Henry and investors who were not satisfied with the pace at which the company was progressing. 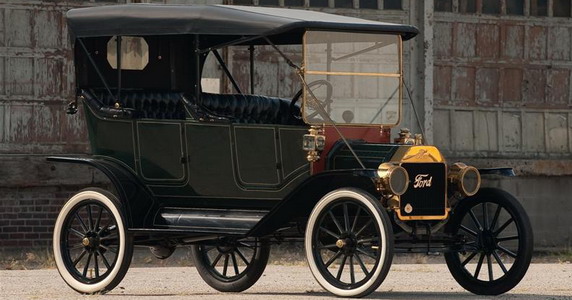 By the early 1900s, the American auto industry numbered about 30 companies that produced about 2500 vehicles. Most of the promotions took place on racetracks, and in 1901 Henry manages to beat, on his own car, a car made by Alexander Winton, at that time the largest vehicle manufacturer in America. Making a name for himself, Henry finds a group of investors and in 1903 founded the Ford Motor Company. The most famous names among investors were Alexander Malcomson, who invested $ 100000 and Dodge brothers who decided to supply the company with engines. After the initial cost of organizing the company and manufacturing the factory, the company was left with $ 28000 to develop a new car. In the first year, Ford's 125 workers managed to produce 1700 cars, and production went especially slowly thanks to poor organization. Specifically, the company was purchasing parts from suppliers, and workers would take parts as needed from the room where all the parts were located. Ford's early cars were very expensive and the company made big profits on them, which made investors happy. Henry didn't like this idea in any way. The production of expensive cars left most people with no chance of owning a new car, but then the situation began to go in favor of Henry. Namely, in 1906, Malcomson founded another auto company, which soon went bankrupt, and in order to pay the costs he was forced to sell some of the property to Henry.

When Henry became the majority owner of the company the same year, he began work on a new and inexpensive car that would eventually become a Model T. Work on this car began in 1906 in secret conditions that no one else in the company knew about except the owner. In early research, Henry noted that French cars do not use metal like most competitors, but a special metal called Vanadium, which is lighter and, at the same time, stronger and cheaper. Interestingly, for the next five years, the only companies that used this metal were the French luxury companies and Ford. The first prototype was introduced to the public in 1908 and was a typical car from the period with the exception of the price. The Model T weighed in at just 540 kg, and for only $ 825, the buyer had to get a four-door sedan, a 20-horsepower engine and a two-speed transmission, which was pretty easy to drive. Henry himself was so excited for the test ride that his assistant had to pick up the wheel. Early testing and advertising was done mostly off-road, and during the off-road race between New York and Seattle (about 4500 km), only two Model Ts finished the race. The first Model T was shipped to the customer in October 1908, and in the first year Ford sold about 10000 copies. All the early models were manufactured at Ford's old Piquette Avenue factory in the same way as the earlier models, but the great popularity made Henry start thinking of a new way of production. 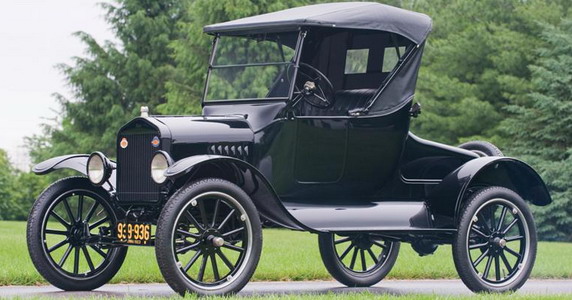 That's why, in 1910, a new factory was opened called Highland Park, designed by the famous architect Albert Kahn, and called by John D. Rockefeller the famous "industrial marvel". The factory had four floors where the first American conveyor belt was made. The car shell would be manufactured on the top floor and then the car would be sent to the third floor where the car would be painted and given chassis and tires. On the second floor, the car would get the rest of the parts before the engine was loaded into it on the first floor where it also went through final inspection. On one occasion, Henry stated that he got the idea during a visit to Chicago where he saw a conveyor belt at a food packaging factory and decided that a similar system could be applied to the auto industry. Thanks to this pace, Ford increased sales from 19000 vehicles in 1910 to 78440 vehicles two years later. In the same year, Ford reduced the starting price to just $ 525, making the car cost less than the average citizen's salary for the first time. Although Ford now made smaller profits than in the past, sales in 1913 amounted to 248000 units, generating an impressive $ 25 million profit. By 1914, Ford's 13000 workers were able to produce 260000 vehicles a year, while in the rest of the industry as many as 66000 workers produced only 26000 more. That same year, Henry shocked America when he posted a $ 5 subsistence allowance for his workers, which was double what workers at other companies made. 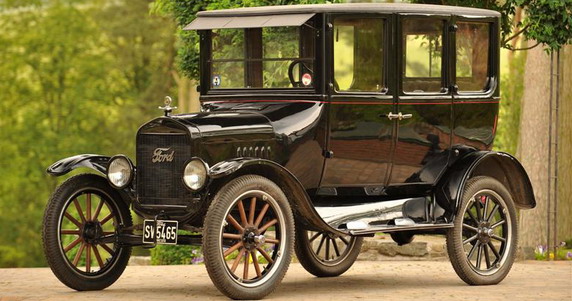 There are several reasons for this move. Henry noted that workers were more satisfied with the higher pay, which made the product better, but the main reason was that Henry wanted his workers to be able to buy the car they produce. Interestingly, the only color available on the Model T was black, for which Henry made the famous statement, "You can get the Model T in any color provided it is black." Henry opted for the move because black was the cheapest to produce and was also the fastest to dry, and from 1914 to 1925 this color was the only one on offer.

Popularity continued to grow with the addition of new versions, and the two-millionth Model T was manufactured in 1917. Two years later, the Model T finally gets a jump starter, allowing owners to start the car on a turnkey basis, and in 1921 the five-millionth Model T leaves the factory. That same year, Model T controlled as much as 60% of the world market, and used Ford's money to invest in new models as well as buy luxury Lincoln. Although General Motors has introduced a line of new and modern vehicles.
The Model T continued to sell in record numbers. As many as five million Model Ts were shipped worldwide from 1921 to 1924, largely due to the very low price that dropped to a minimum of $ 290. Henry's son Edsel tried to convince his father that the company had to invest in new products otherwise it would Model T to bury the company, but received only a negative response that sales were satisfactory and that what it was doing should not be changed. Edsel even wanted to surprise his famous father in 1924 when he was on vacation. When it came back, Edsel had a ready-made prototype of the new Model T-based vehicle with a more modern design and more powerful engine. Henry just looked at the car, climbed on top of the roof, and said he didn't want to see anything like that or else he would start laying off workers. However, by 1926 Chevrolet was stealing sales from the Model T and on May 25, 1927, Henry made the difficult decision to cease production after over 15 million units were manufactured. The plant was closed for six months to accommodate the production of the new Model A, which had a more modern design and technology. Although sold in huge numbers, the Model A never failed to make a mark in history as a Model T.
Ford managed to survive the Great Depression and emerge as the world's second largest manufacturer. Henry Ford continued to run the company until his death at the age of 83, in 1947 when his grandson Henry II took command. The Model T has left a deep mark that only later gained in name and popularity. Until the end of World War II, the audience was looking for a successor in the world and can be said to have got it in the form of a Volkswagen Beetle, and other cars with a similar strategy that left a significant mark on the Mini, Fiat 500 i Citroen 2CV. In 1999, the Ford Model T was named the 20th Century Car of the list of as many as 700 candidates. Some would say that similar cars would appear sooner or later and there was no Model T, but the question is what the future of the auto industry would be if this car did not appear at the right time.