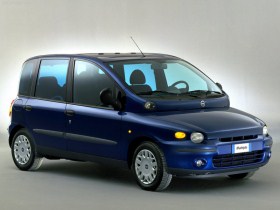 Italian Fiat decided in the second half of the XNUMXs to shock the automotive world. He created a truly compact minivan extravagant for six people - the Fiat Multipla.

Fiat played bravely, instead of creating another van based on a compact car, it was designed by Fiat Multipla from the beginning, breaking most of the unwritten rules that apply to other manufacturers. The car had a huge width of 187 cm (6 cm more than the Vw Sharan), but its length was only 399,5 cm.

If you are looking to buy a cheap car without bothering with low build quality, then the Fiat Multipla seems like an interesting proposition. The greatest resistance before buying this car, however, is achieving cosmic styling and thinking about it. The biggest advantage of this model is the roominess and low maintenance costs, but buying a car has to account for a variety of problems, which fortunately require to eliminate relatively little financial expense.

Fiat Multipla made its debut in 1998. First, in the Italian market, and a year later in other countries. Whatever you look at, the Fiat Multipla is one of the most recognizable and original models in the world. Some of the solutions implemented were quite revolutionary.

The Fiat Multipla badge already bore the ancestor of today's compact minivan, manufactured from 1956 - 1969, based on the world-famous model 600. This car was especially popular with taxi drivers. After almost three decades from the end of production came his ideological successor.

The Fiat Multipla has undergone a total of three upgrades. The first in 2002 brought minor interior modifications, increased power to 85kW turbo engines and side airbags as standard equipment. Additional modifications were 2004 and 2006.
The largest of them in the spring of 2004, when the appearance of the front of the vehicle was radically altered. The length of the model was increased by less than 10 cm to 4.09 m (the original version was less than 4 m). Radical restailing is Fiat's desire to attract new customers who find the forms of the original version ugly.
In 2006, a couple of visual details were changed. 1.9 JTD the turbo diesel has been replaced by a modern Multijet engine, also with a capacity of 1,9 liters, providing 88 kW.

Today, the prices of used "multiples" in Italy are quite favorable, and most of the models offered there are retired from the taxi service.

In addition to the innovative approach to the interior, the "multipla" also served Fiat to present various eco-friendly variants based on this model, such as a hybrid or methane version, as we present it.

Contrary to popular belief, the Fiat Multipla is a reliable means of transportation, which usually has no problem getting to its destination. 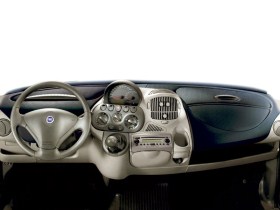 The driver instinctively searches for the dashboard behind the wheel. The instrument panel is located to the right of the steering wheel, you have to get used to it, the plastic is not of high quality. On the left side of the driver's seat is the parking brake. All instruments and controls are grouped together, in front of the middle seat, at an angle to the driver.

A trunk with a total volume of 430 l is sufficient, expandable up to 1900 liters. The view through the windows is great, the size of the mirror is also sufficient, giving the driver a very good overview of what is happening around the car. There are also various useful cabin storage compartments and despite being wide, the Fiat Multipla is relatively short, making parking relatively easy. However, unlike the Fiat Doblo, it is not available with seven seats and does not come with sliding doors.

What is interesting about the Fiat Multipla is that it has three seats forward. The middle seat can be slightly reversed if the sitting person interferes with the driver when operating the transmission. All three passengers in the front row can comfortably sit forward without touching each other due to the wide width of the vehicle. When the center seat in the front row folds, it becomes a small table with 4 cup holders.

Standard equipment includes front airbags, power windows and mirrors and central locking. Many of the cars that have reached Polish Western Europe are present on board and the ABS, air conditioning and audio systems of the factory are present. The level of equipment has gradually increased.

The Fiat Multipla offers excellent visibility and spaciousness. safe driving behavior, stable enough, neutral and predictable. Due to its small length, it is not problematic when parked. 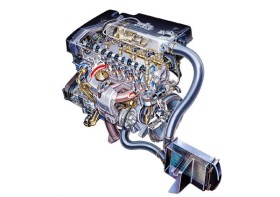 The drive is transmitted to the front wheels via a fifth gear manual transmission.

The 16-valve 1.6 XNUMX-liter gasoline engine consumes a lot of fuel and requires regular control and replacement of the timing belt elements (otherwise the timing belt may be a problem). If you want to minimize the cost of using the vehicle, choose a Fiat Multipla with a petrol engine and the installation of LPG.

1999 Fiat Multipla Introduces a Bipower Version Using Natural Gas (Methane). The 1.6 engine has 103 hp instead of 92 hp. The gas is stored in four cylindrical bottles under the floor.

Probably many have heard about the high durability of the powertrains in Fiat Multipla, these are the facts for the diesel engines used in the car, they enjoy very high durability no matter which JTD variant you choose. The recommendation is diesel, its weaknesses are the flywheel (withstand 200 km) and the flowmeter.

The 1.9 JTD diesel has higher torque, which makes the Fiat Multipla diesel engine run more efficiently than the petrol variant. It consumes 6.2 - 6.6 l / 100 km. Cars with a 1.6 16V engine consume an average of two liters more.

Although the Multiplu TUV ranks below the average for a reliable car, their owners' experiences say otherwise. According to them, it requires only routine maintenance and generally no shortcomings ie. there are no disadvantages.

The Fiat Multipla is not too problematic, but before buying it it's worth paying attention to a few details, which can cause significant problems over time, especially if the mileage exceeds 200 km. The most common failures are the little things.

Diesel engine. On the first Fiat Multipla, there were problems with the injection pump and injectors. Symptoms: loss of power and / or malfunctioning of the engine and leakage of diesel on the fuel line. But most of these defects were corrected, while the car was in the hands of the first owners. The reliability of the injection of these engines (common rail nozzles) has become very correct since January 2000. There have been sporadic cases of problems with the injection pump until July 2001.

1.9 JTD engine. On models manufactured until September 2002, a possible reduction in engine power after 100 km. Caused by the contamination of the flowmeter. Replace the flowmeter.

1.9 JTD engine. On models manufactured until December 2001, mechanical vibrations and noise (noise) occur at a cold start of 40 km, which grow quite rapidly thereafter. Caused by a problem with the crankshaft pulley rubber part. Replace the pulley.

Exhaust gasoline versions tend to rot, and they are expensive to replace.

To monitor the condition of the gear belt regularly, by removing the cover, you can see its condition.

Door and window seals collapse and allow water to penetrate and wind noise into the cabin.

A more serious problem can be caused by the alternator, to which the housing cracks (breaks). Altenator is a problem with stones near the road.

The headlights, due to their small diameter with fairly strong glass heating, when cold water falls, the glass can crack (shoot due to poor plastic quality). After the 2003 restyling, the Fiat Multipla takes on the standard shape (model concept), the problem of headlamp firing was then resolved.

Hanging. On models manufactured until September 2001, asymmetrically accelerated front tire wear, usually on the inside of the tread. Sometimes 10 to 000 km of tire replacement is required. First improvement made in December 20, final intervention in September 000. Services have made adjusting the front axle usually free of charge.

Hanging. Fiat Multiples produced by December 2001 stabilize the stabilizer from 50 to 000 km.

Backdoor. On models manufactured until December 2003, it will be difficult to close the tailgate, which sometimes needs to be slammed loudly.

The control panel cassette is hard to close.

For models manufactured until December 2001, it was a cheap inner plastic, worn out very quickly. Frequent peeling of the ashtray, seat material.

Stacking often works badly due to broken wires and plastics.

The problem of stabilizers on the front axle troubles almost every older used car.

Wavy brake discs are no exception.

Radio. Some models have a built-in radio with very little cell capture capability. 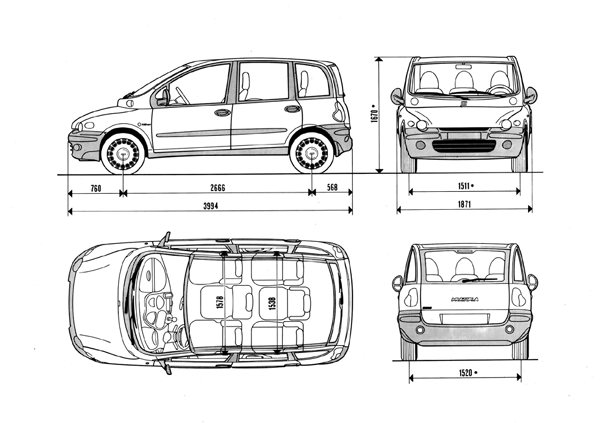 You can buy a cheap but fairly reliable minivan with a comfortable interior. The Fiat Multipla is short and very wide. Frustratingly less malfunctions and a small choice of engine version.