Who doesn't have it in their head…

In order for our engine to be complete, it needs to have its head set. However, this is not the part of the engine that "thinks" about anything, especially in the age of electronics, but the part that got its name because it comes to the top of the block. Once again, the engine head contains many components necessary for engine operation.

The cylinder head is, by definition, the part of the internal combustion engine located on the block, above the cylinder. It closes the cylinders, thus forming combustion chambers. Also, the cylinder head provides space for the passage of intake and exhaust ducts, and its role is to accommodate the valve, spark plug, fuel injectors, camshaft bearings and other engine parts. Certainly, when we say that the engine head is "above" the engine block, it is only a descriptive definition that the engine can be positioned in the vehicle so that the head actually comes from the side, at an angle and the like. 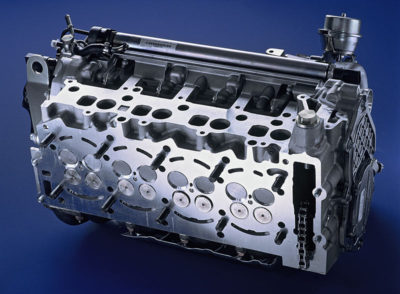 Ordinary engines, ie those with cylinders in a line, generally have one head. As a rule, engines with cylinders in V configuration have two cylinder heads, one for each row of cylinders. Finally, the boxer motors that have the cylinders in place have two heads. V engines with a small cylinder gap, such as the Volkswagen VR6, use a single head. Finally, there are exceptions to this theory. Let's just say, for fun, that some large (usually diesel) engines, such as those that start ships or are used in industrial plants, can have one head for each cylinder. Such construction is implemented to reduce costs and simplify any repairs. 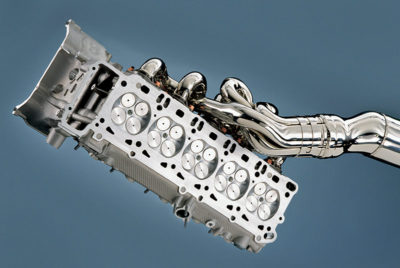 What the engine head looks like is visible from the pictures, so we won't spend too many words describing its physical appearance. This is a metal part of the engine that is very similar to a block. After all, the head of the engine is made by the same procedures, ie casting (sand casting or volatile model or CNC machining). The head is admittedly smaller than the engine block, but again it is a bunch of cast metal.

In today's cars, there are almost no engines whose head is not made of some aluminum alloy, while blocks made of gray cast iron (cast iron) are still somewhat common. The reason for this lies primarily in the fact that aluminum alloys better withstand thermal loads (aluminum conducts heat much better than iron) to which the cylinder head is exposed because it is extremely hot during operation. Certainly, the combustion chambers are located in the engine head, which is one of the fundamental reasons for the significant heating of this part of the engine.

Where it all happens - the combustion chamber

There are spaces (combustion chambers) in different shapes, but the "school example" is certainly the one in the shape of a hemisphere. They are housed in it two (or more) valves properly spaced relative to the center cylinder, while in the middle between them is a candle. This form of combustion space is grateful because the spark most efficiently ignites the whole mixture and (almost) complete combustion is ensured. Another form of combustion space that we encounter more often is the "bathtub" shape. Such a construction is characterized by a short spark path and high resistance to detonation combustion, but the problem occurs when we want to place more valves in it.

We will take this opportunity to clarify another detail. Namely, the mentioned detonative combustion is a phenomenon that occurs when the mixture ignites spontaneously at the point of contact with very heated parts of the cylinder or combustion chamber. Also, if it is a question of petrol engines, at the same time the mixture ignites with a spark plug spark and thus two flames "collide" somewhere inside the cylinder, ie. combustion chambers. We hear that collision of two flames as a kind of "knock" from the engine. In practice, this is the case when e.g. on an uphill slope, depress the accelerator pedal too much in a higher gear (low octane fuel may be the cause). This knocking coming from the engine is described by many as a legendary misnomer that says "valves are heard". 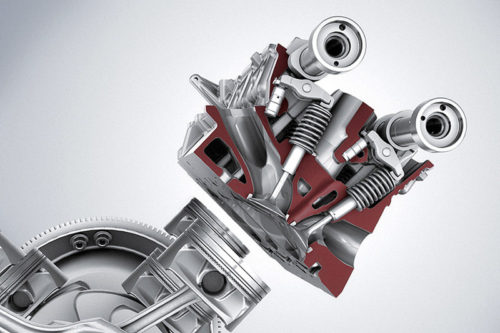 A third common form of combustion space is tucked into the forehead of the piston. This shape makes it possible to achieve a very high degree of compression and is often used in engines whose cylinder diameter is larger than the stroke of the piston. It is typical in that its cylinder head is almost completely flat, without dents (except for the intake and exhaust ducts, spark plug threads, valve openings, etc.). The last more common shape of the combustion chamber is wedge-shaped. Here the advantages are similar to those in the form of a bathtub, but again there is a problem with accommodating a larger number of valves, while the piston head almost always has to be deeply incised to make room for the valves (while open).

Finally, it is clear that neither of these forms of combustion space is ideal. The matter of choosing the shape of the combustion chamber, as so many times before, is a matter of the particular engine being designed (or reworked) and its expected characteristics. But the most important requirements that the combustion chamber (chamber) has to fulfill would be: the best possible mixing of fuel and air (vortex of the mixture) and the shortest path of the spark to all parts of the mixture. As we can see, the goal is primarily to achieve as much combustion as possible, and thus to maximize the utilization of the fuel used. 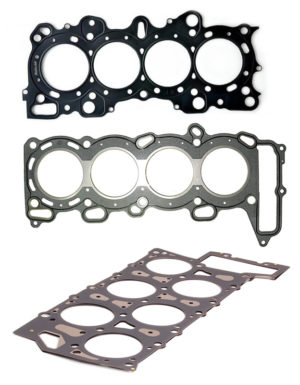 Various versions of the cylinder head gasket - four holes can mean: 4-cylinder in-line or V8. Below is the diutung of the VR6 engine (Honda / Mazda / Volkswagen)

And the engine head on the other hand?

Speaking of the cylinder head, we have to look at its upper part as well (if we assume that the lower one is the one from which the valves, spark plugs, etc. come out). Already at a glance (certainly, when the valve cover is removed) we can evaluate whether it is a camshaft (shaft) engine design in the head or whether we are dealing with a camshaft-mounted motor (valve block) on the side, valve lift rods etc.

The valve cover is nothing more than a piece of sheet metal that is well sealed on the top of the cylinder head and whose role is to preserve the oil in which the valve actuation system "bathes" while the engine is running. An oil filler plug is usually located on that cover. Also, let's not forget another gasket, the heaviest in the whole engine. It is a cylinder head gasket (cylinder head gasket) located between the head and the block. The purpose of this seal is to prevent the possible release of gases from the burned mixture, oil or coolant.

Previous: Alfa Romeo 1300 GT Junior - Model History
Next: Audi A4 B8 - What are the most common problems and breakdowns of the Audi A4 B8