Everything described in the previous section talked about how and what conclusions the car engine electronics make. But, the same electronics needed to learn something first. This is what we talk about in this article. 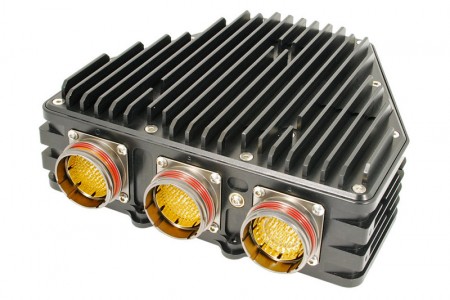 The second sequel to the car engine electronics will deal with a few more details that simply didn’t fit into the previous article. But in order to stay true to our basic principles, we will not go too deep into this topic, about which numerous books have been written anyway.

The first part of the article will explain how the ECU (electronic monitoring unit) can "learn" something. Of course, it is clear that no one was born smart by himself, and neither was our control computer. All the intelligence with which the Electronic Control Module (or ECU) draws quick conclusions about the moment of ignition, the required amount of fuel and everything else, is in the program entered in its memory.

In fact, when you see busy mechanics before the Formula 1 race frantically plugging their laptops into some connectors on the car, it will be clear to you that they are checking or refining the parameters needed for the electronic systems to work properly. Fortunately, Formula 1 cars are in fact "kit" vehicles in which it is possible to quickly change everything, including software that manages the engine and adapt it to the characteristics of a particular track, sudden changes in climatic conditions and the like.

A little cartography - an ignition map as an example The content of ROM memory is one of the most important "books" needed for engine operation. The data entered in this chip is called a map and contains tables by which the CPU, with the help of input parameters, calculates what output parameters are needed. The butterfly position (load) data is arranged vertically on our injection map, while the columns are divided horizontally according to engine speed (rpm).

As in a multiplication table, the CPU finds in this folder the place where the values ​​of the input parameters of the butterfly position and the engine speed intersect and reads the pre-entered value, which is also the code for determining the output parameters. Thus, for example, one input parameter can display the position of the butterfly coded as "4" (say about "half throttle"), and the other the engine speed coded as "6" (say 3000 rpm). At the intersection of these two columns is the code "96" which for the CPU means the exact moment of ignition and / or a certain amount of fuel that needs to be injected. 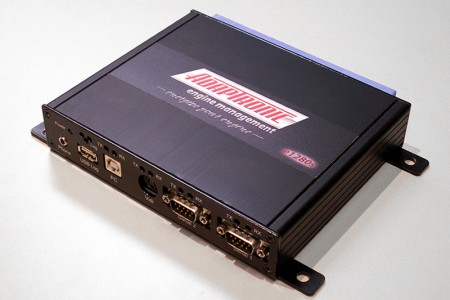 A bunch of chips for a handful of Dollars

The end of the story about the Electronic Control Module concerns "tuning", ie. processing the parameters required for engine operation. It should be taken into account that the serial ECUs we find in everyday cars are by no means reprogrammable. More precisely, although it is possible to read from their KAM memory what "torments" the engine, it cannot influence (software) its work, and possibly increase its power, etc. The reason for this is simple and can be explained by the fact that car manufacturers want to keep everything to themselves, ie force owners to go exclusively to authorized services that only have computers and software that can read KAM. Also, it is certainly not in their interest for anyone to "rummage" through the electronics of their car, and then after the stories about how consumption has increased by so much and so much.

Of course, new times have brought a lot of electronics to cars, such as simply grinding the head, polishing the intake ducts and the like. they are no longer the only and true path to success, whether we want to increase engine power or change some other parameter (eg sometimes tuning electronics gives a small increase in maximum power, but therefore provides significantly more torque at lower engine speeds). The first thing that needs to be "attacked" today during tuning is certainly the ECU. And fortunately, so that not everyone at home on their own computer has philosophized about how and what to do, various car manufacturers offer a whole range of solutions. 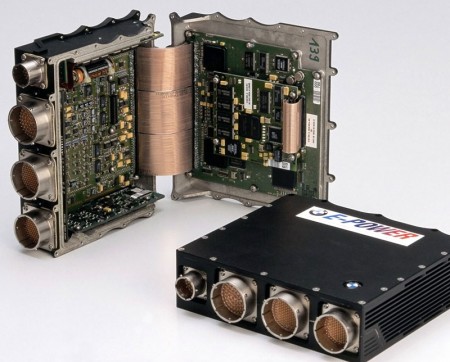 If your new ECU does not fit into the factory site, remember that it needs to be well-cooled, just like any computer (BMW AG)

Most often, this is a replacement CPU for which, the same, they guarantee that it will significantly strengthen the engine. However, even if you manage to rip the old CPU out of the ECU and insert a new one, the result will usually be halved. The problem is that by replacing the CPU, you usually get electronics that work with the same ROM parameters (maps), but simply add a little more fuel to all the codes. However, this is not the way to go. The best (and most expensive) solution is actually to replace the entire ECU or at least the CPU and ROM chips or reprogram the latter (EEPROM) resp. their replacement (PROM). Thus, it is possible to "insert" a new CPU into the car, but also a new map of parameters according to which it works.

In the end, we have to distance ourselves from this theory. Namely, it is clear that the electronics of different cars are different. That is why, with some models, it is possible to do something that others will not allow you and vice versa. However, "chipping" has become a common occurrence that has brought a lot of fun to some, but also a lot of burned engines to others. It's all a matter of compromise, thorough consideration and harmonization of individual components (it is clear that increasing the power requires possible other modifications to the car - the air filter is the most common example). 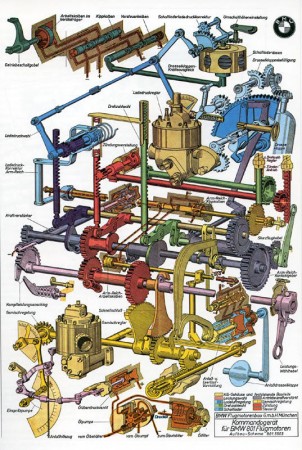 Few connoisseurs of internal combustion engine technology will disagree that the first "control computer" ever was a very complex mechanical control device called Kommandogerät designed to control the various functions of the 801 BMW 1939 aircraft engine.

The aircraft engines of the BMW 801 generation (A - H2) were an air-cooled 2-row 14-cylinder 28-valve star engine with a displacement of 41,8 liters (version 801A). The engine was equipped with fuel injection and a mechanical compressor. Depending on the version, this propulsion engine developed between 1560 and 2000 hp and weighed between 1010 and 1250 kg. The BMW 801, in all versions, was produced in more than 28.000 copies.

In any case, the Kommandogerät (control device, literally) or "mechanical computer" was a mechanical-hydraulic control unit that, depending on the position of the throttle, automatically determined the pressure of the fuel pump, the amount of fuel and thus the composition of the mixture, moment ignition, compressor settings and propeller blade pitch. The use of this device significantly reduced the load on the pilot, who had to control far fewer systems and could devote himself to other tasks.

And, as we mentioned in the previous chapter, the first electronic ECU for a production car was the Bosch D-Jetronic, in 1967. This system was built using some of the Bendix Corporation patents, and the first car fitted with it was is Volkswagen Type 3.