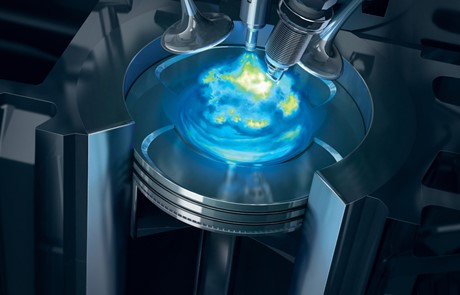 Detonation combustion: metallic clicking that can destroy the engine

With modern turbochargers it is important to prevent dangerous detonations by adjusting the ignition angle and the amount of fuel injected, and the key is a detonation sensor, which works on the principle of a stethoscope.

If you have caused a metal clang of the gasoline (Ott) engine at lower loads and high loads at low loads and high loads, be sure not to make it happy. You heard the beats pistons and links to cylinder walls, which are a consequence of detonations, ie detonating combustion. It is a premature, irregular and explosive combustion, which occurs locally in front of a rapidly expanding layer of flame and causes drastic, rapid changes in combustion pressure. This dynamic pressure creates forces and shocks that 'attack' the hottest parts, especially the endangered ones, because high temperatures reduce their hardness and strength.

Gasoline engines provide ignition candles. At the end of the second cycle (compression), the compressed mixture of fuel and air ignites with a spark, which jumps between the electrodes. Sometimes, before the spark jumps, the mixture ignites spontaneously, ie an uncontrolled explosion. It is even more dangerous if detonations occur after the flash point, which can take on extreme proportions. Then a large amount of heat is suddenly released, and the combustion rate increases to more than 500 m / s, ten times more than normal.

There is a large local heating of the cylinders, pistons and valves, which can cause permanent damage. A few minutes of such work is enough to break off a part of the piston and the valve, break the piston front, break the connecting rod, crush the bearing, damage the crankshaft…, destroy the engine. So it’s not harmless at all. Detonations often occur at low speeds and high loads (for example, when we go up a steep serpentine in the second stage). It is good that we hear them then and we can react - reduce the gas and engage a lower gear. 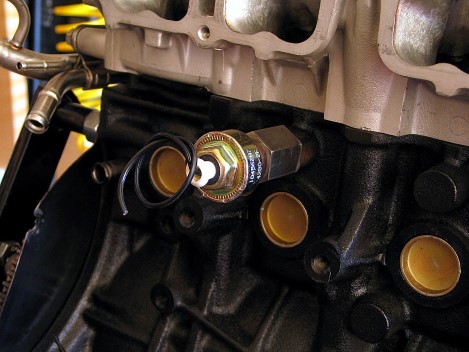 Detonations at high revs are more dangerous, which we do not hear due to engine and tire noise and wind noise. Then we cannot react and great evil can arise in a short time. To prevent it, a detonating combustion sensor (click or knock sensor) is installed on the engine block, on the suction side. The small assembly, which looks like a doctor's stethoscope, accurately registers the first signs of detonation in the cylinders. It reports them to the central control unit, which quickly changes the operating parameters of the engine. But let's go in order…

The detonation is affected by the inhomogeneity of the mixture. Glowing combustion products spread very quickly, creating a pressure wave at the speed of sound, so the unburned mixture is heated twice - by heat combustion and pressure rise.

This encourages the creation of a source (one or more) of rapid, explosive combustion, at the highest temperature locations (near exhaust valves and accumulations of garages). Sudden pressure increases and temperatures are most dangerous for aluminum pistons, as they have significantly lower melting temperatures than steel (655 to 710 ° C) and lower tensile strength. The problem is the difficulty of cooling the pistons, as their heat is only vented through the ring and with oil flow from the underside.

Since the speed and load of the engine are chosen by the driver, and the temperatures of the intake mixture and coolant and the accumulation of soot depend on the driving conditions, detonating combustion can be influenced by two remaining parameters: adjusting the ignition angle and the amount of fuel in the mixture. When detonation combustion occurs, the ignition moment shifts towards earlier or later times, measured at an angle on the crankshaft. In drastic cases, the amount of fuel injected is reduced.

'Beating sensors', which work like sound microphones, are used to detect a dangerous phenomenon. Sound waves cause vibrations of the ceramic ring, which is connected to the connector by a variable current contact. The voltage at the terminal directly depends on the frequency and amplitude of the vibrations created by the explosive combustion pressure wave. With four-cylinder engines, as a rule, one sensor is placed on the edge of the block, and with multi-cylinder two. 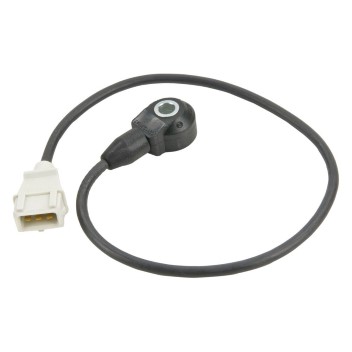 Adjusting detonant combustion allows for an increase in compression ratio, improved performance and reduced consumption, even with lower octane gasoline, with a slight reduction in power, but without the risk of damaging vital parts.

This is how the detonation sensor works

- functions as a doctor's stethoscope, and is designed as a broadband vibration sensor, which propagates through the engine block at the speed of sound

- in its core is a piezo crystal, which converts vibrations into electrical impulses

- are sent to the central control unit, which determines and then changes the operating parameters of the engine, primarily reducing the ignition angle