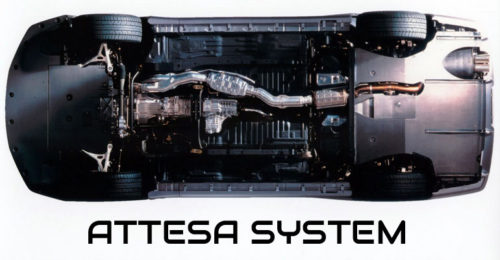 The automotive world is full of abbreviations. Starting from engine markings, gearboxes to electronic systems. Every manufacturer is trying to come up with a new, revolutionary abbreviation. Fortunately, wise people agreed on the norms of labeling metric units like horsepower or NM. They have not yet managed to bring automakers into order to create a unique register of abbreviations for automotive systems, so today e.g. a common rail diesel marking system from one manufacturer named D4D, another CTDi, third dCI, etc. is Nissan's Attesa system. You will most often find her in literature related to the anthology name Skyline GT-R, although there are other Nissan models that have had this system built in.

Let's start with the name of the system. The acronym is that a new, sometimes revolutionary, solution to a rather long name could be reduced to something more drinkable, and above all in typing and expression more acceptable. ATTESSA is originally an abbreviation of the English words "Advanced Total Traction Engineering System for All-Terrain". In layman's terms, it is a 4-wheel-drive (4WD) system developed by Nissan and fitted, in addition to models from the Nissan pallet and into vehicles of Nissan's luxury Infiniti division. For those interested in learning more about the ATTESA system itself, I can find all the information at Wikipedia.
My story will be about the ATTESA-ETS system built into the Nissan legend - the Skyline GT-R, in the most famous models such as the R32, R33 and R34. 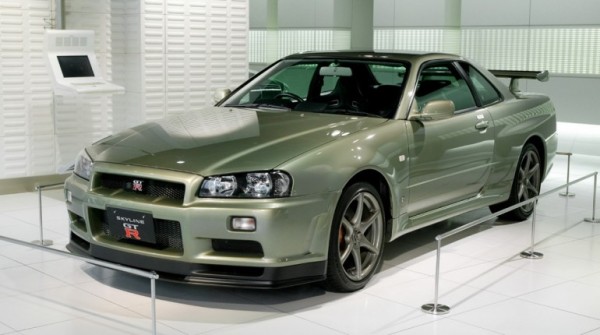 Much to the chagrin of all connoisseurs and lovers of these models, we do not have a single copy on Serbian roads (registered in Serbia). There was a specimen of R33 in silver that cruised through the streets of Belgrade. Unfortunately in the non turbo GTS option, which does not have this system.

This is the specimen in question, so far there has been no information that it has been spotted. These photos are several years old.

That doesn't stop us from learning and learning about this now cult model, and the systems built into it, which is why it deserved the nickname Godzilla.
Since you were initially educated via Wikipedia, which I am specifically talking about here, I will deal below with the operation of the system itself, as well as all user errors. As practice has shown, the complete system of the case itself and the fins are very well designed by Nissan. Housed in an extremely compact body (we know that the mass is the biggest enemy of performance), this system, if not driven "dry" or at a minimum, will rarely cause problems. Of course, everything has its limits, so if this system is used in drag racing, where the engine power (280 hp) is increased double or triple, failure or breakage of the assembly will occur. There is a term in the English language for well-designed things, which suffer even twice the power of the bulletproof design. We can safely say that the ATTESSA system is one of them.

The Attesa system is first and foremost a conventional and fairly simple 4-wheel power transmission system. You all know the super car of the eighties - Porsche 959. In fact, the ATTESSA system is a sophisticated system from the racing Porsche 959. Even today, 20 years since the premiere of the system, it still delivers great performance and can handle much more modern solutions, where electronics play a bigger role than before. twenty years earlier. We will be dealing with the ATTESA-ETS system, carried by Skyline GT-R models, first introduced in 1989 with the promotion of the R32 generation. 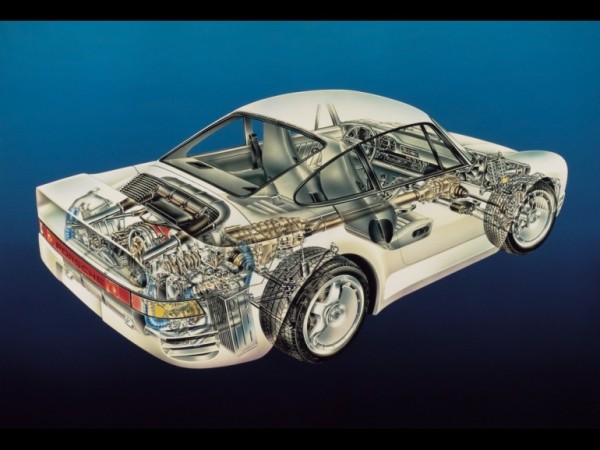 There is one thing that is not unique to our people, and can be applied to vehicle owners with this system. Read the user manual. The system can be well designed, but if the use of the system itself is improper, there is no such thing as failure to cancel obedience. From the experience of well-known tuner workshops specializing in GT-R models, 75% of failures are solely due to improper maintenance by vehicle owners.
Problems range from incorrectly installed aftermarket parts, oil of the wrong gradation, to mis-connected components leading to the fracture of gears in the housing and the blades inside. 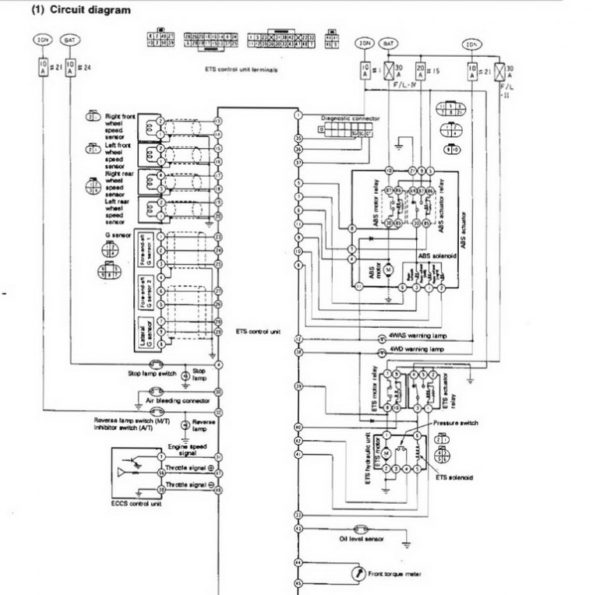 With the GT-R model, all three of the most famous generations (R32, R33 and R34) have different software. This is logical, because the system was constantly improving, ie. his brain (ECU). The best evidence is the track wins in the legendary JGTC Championship.

The heart of the ATTESA-ETS system is the ATTESA Power-Pack unit, located immediately after the gearbox. Admittedly, since it has a longitudinally mounted motor (RB26DETT), the rear drive is logical, but a front drive has been added here.

The essence of the ATTESA system is a high-pressure pump, a tank and a system that activates it to deliver enough pressure to the differential housing. The Power-Pack system produces that typical “bzzzz” sound when contact is made while pumping pressure to activate the ATTESA system. Inside the differential is a combination of steel rings and high-quality friction surfaces, so in practice, given the simplicity of the system and the quality components, it is rare that it can suffer. Because the fins are bathed in special oil inside the system casing, they withstand heat well and the friction values ​​inside are insignificant. It is no wonder to encounter GT-R specs with this system, whose state of the fins looks almost brand new, even though the car has been driven sharply and is over ten years old. From practice, it has been shown that the ducts in the ATTESA system exceed, over durability, more than twice the lifetime of the conventional transmission component (above all, I mean the clutch plate in the transmission). However, it is extremely important to monitor the fluid level in the system, because if it is defective or the system loses it, this simple and efficient system failure can occur very quickly. 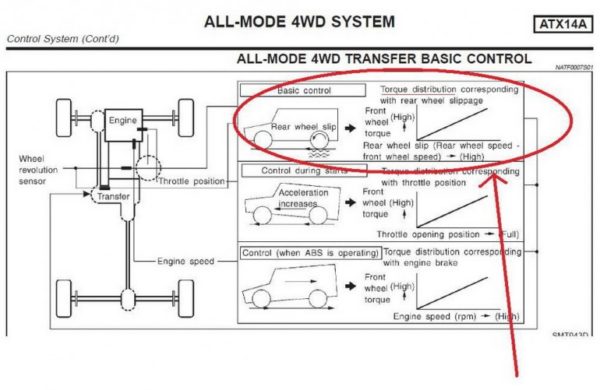 What is crucial to know is that there are TWO types of fluid used by this mechanism. They are completely independent, and should never be mixed, which is one of the most common misconceptions when using and servicing this system. The oil canister, located on the body of the system, uses oil with a very thin lubricating film, usually a Nissan Matic-D or aftermarket Transmax Z. There is a good reason why it is a very thin film of oil. The film is thin because of the need to move through very small intestines that connect the system and check valves.

The oil used inside the differential housing itself is completely different in purpose and composition. Although Nissan uses the same oil, when used in difficult conditions (circuit and drag racing), there has been an improved oil, the WR35ATS designation. This is a specific oil that is used only inside the differential housing and allows more power and torque to be transmitted more to the front axle. 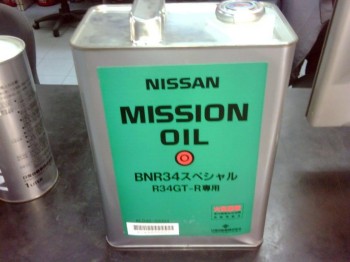 However, it cannot be used for the car's hydraulic system itself, nor in the transmission, as would be expected. The oil is for this purpose only, and the main mistake is to identify the gearbox, as if the two systems are connected, and in reality they are completely autonomous.
The ATTESA system itself is powered by a set of chains and sprockets, which serve to transmit power from and to the housing. They have proven in practice to be almost unbreakable, with the epitome of “bulletproof” products.

In addition to the wrong type of oil used, one of the biggest mistakes is the way the system itself is ventilated. As with any hydraulic system, there may be air in the hydraulic system over time and it is necessary to "ventilate" it. Unlike most other systems, “upside down” ventilation applies here. In translation, it is not ventilated with the bottle upwards, but using gravity. 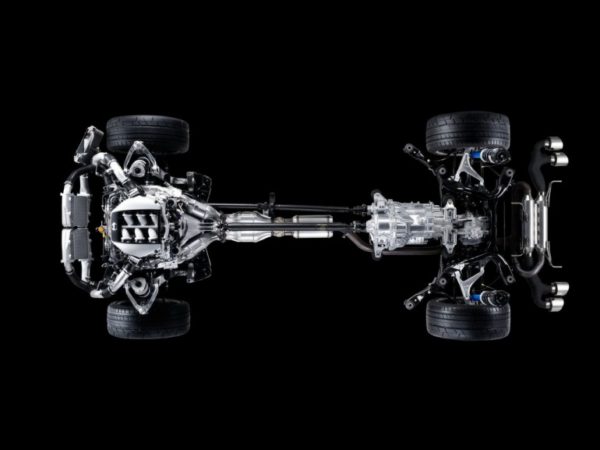 In summary, ATTESA-ETS is a simple and efficient 4-wheel transmission system proven in practice. Its simple construction has contributed to this, which involves modifying the rear-wheel drive, where power is transmitted from the engine via the PTO to the rear differential. 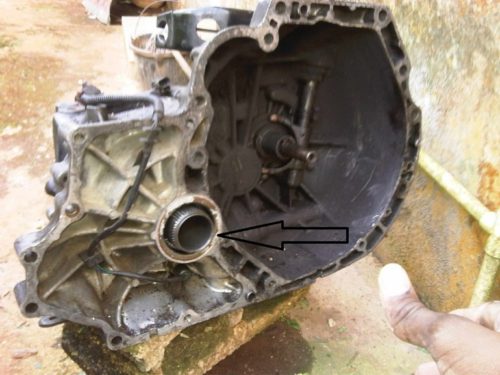 The downside is that power is transmitted to the front wheels via the housing at the end of the transmission. In practice, a proven system, simple formulas, designed to last, so the only thing that can cancel goes to the irresponsible owner or an unskilled repairman. Now that you have some background on the ATTESA system, watch this video:

This brings us back to the beginning. Read the user manual, and this one, like many other vehicle systems, will, with proper maintenance, give you the pleasure of driving your Nissan or other sloping vehicle for the long haul.