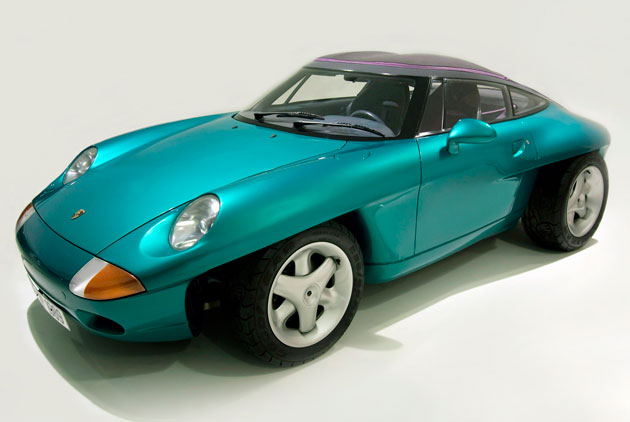 It should be noted that the 1989 Porsche Panamericana concept car is significantly different from us closer to the Panamera. The latter has four doors and is the first production sedan in Porsche history to be manufactured since 2010. The Panamericana, on the other hand, is a compact two-seater concept, first shown to the public at the Frankfurt Motor Show in the fall of 1989. Presented without prior announcements, the Panamerican concept has easily "stolen the show", attracting a surprised and amazed public.

Neither Ferry, the son of the company’s founder, Ferdinand Porsche, or anyone else had the opportunity to drive this wild, minimalist car, nor were there any production plans. Even so, the car has once again demonstrated the visionary thinking, creativity and technical knowledge that has identified the Stuttgart manufacturer for the last 4 decades.

It was a car without restriction in any context, which consciously left a legacy behind while retaining the distinctive shape of the models to date. The concept combined all the advanced elements with fashionable details, while extremely innovative, it stuck to tradition. It was an attempt by Porsche's designers to create a car for all true brand lovers, for those who drive it fitting.

Porsche announced on this occasion that the emphatically racing concept car indicates a possible future development of the 911 line. It was probably then that all Porsche enthusiasts hoped that the Panamericana would be translated into a serial 911 90s in some form. 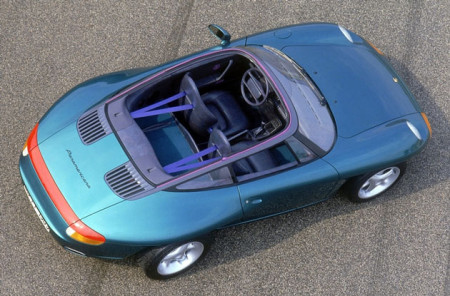 Design
The appearance of Panamericana simply found the public unprepared. This was nothing new. Almost every new Porsche from 1948 onwards stood out from the crowd. Still, the Panamericana did not resemble any other Porsche on the streets. The body design consisted of merging "offensive" round surfaces intersected by sharp lines. What stood out especially was the low and fully open roof. In addition to the sloping structure of the roof structure, which extended all the way to the aggregate cover at the rear, there was only glass around the driver and the only lane. And if that wasn't airy enough, the roof and rear windshield could have been removed.

The design of Panamericana itself was guided by a mix of fantasy and freedom of movement, extending beyond standard forms framed by law. Many have compared the concept to a buggy, but with far more power than the one for chasing sand dunes. 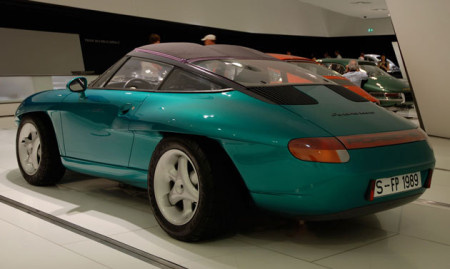 Panamericana Carrera
As exclusive as it was, the design concept was also linked to tradition. According to the company, the styling of the Panamericana concept was intended to serve as a reminder of the then restored Carrera Panamericana, an endurance street race of the early 50s. The challenging and unforgiving track through Mexico, driven once a year, required cars to be faster on both asphalt and less traction. On one occasion, he joined the Porsche 550 Spyder, where he gained worldwide fame here, winning the 1953 and 1954 races. The Spyder dual camshaft unit has been fitted to all Porsche racing models since 1954, bearing the Carrera suffix as a designation of racing origin.

The Porsche Panamericana concept was a clear evolution of the traditional 911 shape, but with the addition of a modern attitude that introduced the classic profile to the future. The lower edge of the glass surfaces was almost perfectly straight, and with the falling line of the roof it merged to form a fastback profile that, while standing, seems "fast".

If you were to stand behind the car, you could even see the lines that adorn the 991 generation 911, while the fascia did not go far from 959 looks. The 928 Porsche rear light group connected the two sides with light strips, the exhaust end was integrated into the rear panel, while the design of the 6 alloy wheels had an interlaced pattern, with oversized tires mounted on one such compact car, at least during that time.

On the mechanical side, the Panamericana concept was based on the 911 serial 4 Carrera 1989. Their connection ended with the bodywork, which in the case of the concept was made of carbon and glass fibers instead of conventional metal.

performance
Specifically, when developing the concept, Panamericana designers realized that on race tracks since the late 80's, steel bodies have become extinct like dinosaurs. Even aluminum panels began to disappear, making way for new, advanced materials previously used in the aerospace and space programs, and increasingly found their place in automotive racing series. Therefore, Panamericana achieved enviable performance thanks to the use of highly advanced (during that time) carbon and glass fibers, forming a "sandwich" that combined small mass and high structural strength. boxer aggregate and integral drive. This provided performance that was superior to all Carrera's. Top speed was over 4 km / h, while acceleration to 260 km / h was below 100 seconds. And so, the car was fully factory-fitted and in running order, down to a triple catalytic converter for reducing gases.

According to Porsche, the exotic turquoise blue Panamericana has served as a clear testimony that the company will continue to provide "demand" responses over time, using logical yet technologically intelligent solutions. The reason for creating the concept lies in the hands of Dr Ulrich Bez, who at the time was only a year old in Porsche, but previously led the development of the advanced BMW Z1 roadster, a two-seater sports car manufactured from 1989 to 1991.

A vision of pure driving pleasure for two, the Panamericana clearly was the coupe of the future for open roads, not congested highways and clogged city streets. Everything on the concept is designed with the driver in mind, from armrests to instrumentation. Although time ate it, and was forgotten in the eyes of those who were delighted with its appearance, at the end of the last century, everyone imagined themselves at least once in the boy's dreams at the wheel of this unique car, while cruising the streets and the eyes of passersby remained "glued". for unusual body contours.

If not one of those dreams, Panamericana has demonstrated to the world at least the inevitable movement toward super-lightweight, super-powerful construction techniques, entering small doors through small-scale supercars since the early 90s and are now slowly entering mainstream products, dropping everything lower in segments.

In the end, Dr. Ferry envied Porsche the entire automotive world when he received a Porsche Panamericana concept car as a birthday present. That envy grew even more when great car specifications were revealed…

Previous: The occurrence of DANGEROUS INGREDIENTS IN THE ENGINE
Next: Land Rover - History